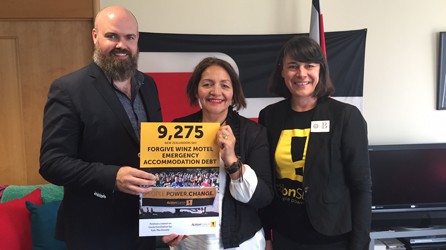 One week ago, I started a petition on OurActionStation because I’d heard on the news that when people are in desperate need for a house but can’t find one, WINZ will loan them money so they can rent a motel room as emergency housing. Sometimes these rooms cost $190/night. People then have to repay the debt, and many say that is just not possible. I saw that this was a ridiculous and inhumane policy in effect locking people who are already in dire straits into further debt. It does nothing to solve the housing crisis and is open to exploitation by the Motel owners, and the people themselves have little choice but to agree.

So I started this petition calling on the Government to forgive all WINZ emergency motel accommodation debt and within a week, more than 9,000 people had signed.

Yesterday I flew down to Wellington to deliver our petition to Minister Anne Tolley. It was because of the support of more than 9000 people that the Minister agreed to meet with me. Together we showed her this issue cannot be ignored.

When I asked her what could be done to help people and families facing the impossible choice between homelessness or unmanageable debt over the coming winter months, the Minister acknowledged the urgency of the situation and told us she would look into possible solutions.

Just a few hours after our meeting, the Minister’s office called to tell us that changes to the policy will be brought forward from September to 1 July. These changes will mean that the first week of emergency housing would be covered by a special needs grant rather than a loan. A week is not going to be long enough if there is nowhere to go once that week is up, so the Government still has a lot of work to be done to make sure there are enough houses for people to move into. 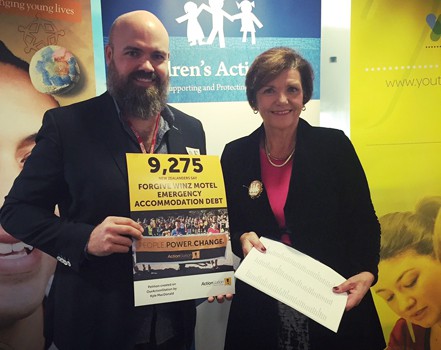 I also suggested to the Minister that after the emergency grant ended, the cost of emergency housing should be no different to what people would have to pay in income-related rent for social housing. This would mean that if – through no fault of their own – a family has no option but to be put up in a motel room rented by Housing New Zealand, they won’t be forced to accumulate massive debt to pay. They would be guaranteed one week emergency housing covered by a grant, and after that pay only what they would normally pay for rent in social housing. This could even prove to be an incentive to the Government to build more affordable social housing.

On the matter of wiping existing debt, the Minister confirmed that WINZ already has discretion to do so, but only in extreme cases. Following our meeting with the Minister, Marianne (from ActionStation) and I also met with Māori Party co-leader Marama Fox, who reiterated her Party’s strong support for wiping all debt incurred by people seeking emergency housing. She plans to present our petition in Parliament, which will keep the pressure on the Government to do more to help people get out of this crushing debt and make a fresh start.

Making the first week a grant for everyone, and bringing that change forward so that it will cover two of the toughest winter months, is not enough to fix this crisis, but it will make a real difference to vulnerable families, and your support for this petition helped make that happen.A nation’s greatness is measured by how it treats its weakest members. New Zealand sometimes seems to have become a nation that not only doesn’t care, but kicks people when they’re down. I launched this petition in the hope and belief that we are so much better than that, and you have helped to prove me right.

To everyone who supported the petition, thank you for helping to make a difference.