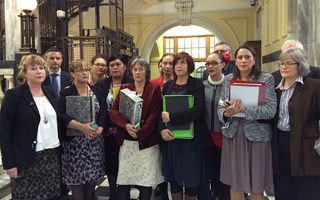 This week the goings on in our Parliament, and more specifically the behaviour of our Prime Minister, made international headlines, albeit for all the wrong reasons.  After accusing opposition MP’s of “backing rapists” over their call for better treatment of Christmas Island detainees , Opposition MP’s staged a walk out.  And the following day, after our PM refused to withdraw and apologise, female opposition MP’s choose to stand up and talk publicly about their experiences of sexual violence.

Mark and I talked about this, why public conversations about sexual abuse and sexual assault are so powerful, and the prevalence of sexual violence on his Sunday Morning show on Radio Live.  (Click here to hear the interview)

But first what was said, and the disclosures (Trigger warning)…

“Speaking in Parliament, to reporters on Story, they said:
Denise Roche (Greens): “I endured years of sexual assault as a child, so to come to parliament and have the Prime Minister say that I back rapists is incredibly offensive.”
Catherine Delahunty (Greens): “I was a victim of sexual assault. I was 15, now I’m 62. It’s not an easy thing to say, it’s a scary thing to do.”
Marama Davidson (Greens): “As a survivor of sexual violence from when I was a young girl, and as someone who has worked with people who have survived, I take deep personal offence at the Prime Minister accusing me of backing rapists.”
Clare Curran (Labour): “It was 11 o’clock at night, I was walking home when a man literally leapt out from behind a bush and tried to rape me.”
Mojo Mathers (Greens): “I was sexually assaulted when I was five years old, it lasted for many years and, like many other women, I never disclosed it.”
Metiria Turei (Greens): “When I was assaulted I didn’t think that anyone would believe me. Like so many others, I didn’t go to the police and I didn’t tell anyone. When the Prime Minister says `you stand up for rapists’ he has no idea who he is talking to.”  (Click here for the rest of the article)

Perhaps not surprisingly, these public disclosures have sparked debate.  Some have questioned how so many women MP’s can have experienced sexual violence?

Well sadly, one in three New Zealand girls have experienced abuse, along with a one in five chance of experiencing a sexual assault as an adult woman.

And it’s that fact that makes Green MP Jan Logie’s seemingly “soft on rapists” stance make sense.  In a blog this week she explained that characterizing rapists as “monsters” also helps no one…

“Accusing us of supporting sex offenders and rapists as if they are the lowest of the low also helps perpetuate rape culture because as well as trivialising the issue it ignores the reality that the majority of sex offenders are people who were previously friends or family. These people are often likeable. The young man who sexually assaulted me when I was at uni seemed otherwise likeable. I didn’t report or even publicly disclose. I  had seen other young women do that and be ostracised, all because ‘he’ seemed like a good guy.”

So how does these sorts of disclosures help?  How is this not “parading their victimhood” as ex-National Party President Michelle Boag suggested?

Well there is plenty of research that shows that when people talk openly about their own experiences, not only does it help others but it also reduces what is known as “self-stigma”, the negative and stigmatizing views we hold about ourselves.  It also gives others the courage to speak out, it provides opportunities to educate the public about the frequency, and effects of sexual violence.

It has the power to reach people, and without question help others feel like they’re not on their own with their own experiences.

And as far as I’m concerned, if that’s playing politics (as some have suggested) I’d like more of this kind of politics please.