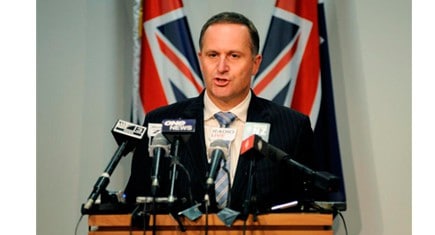 In an unprecedented show of support for the Auckland Council, John Key today announced that the National Government supported a ban on begging be enacted in the Central Auckland region. (Click here for the full story)

“Our only concern is it doesn’t go far enough” said Key. “We would like to see a full scale banning of a number of troublesome social problems, and believe that this is only the start. I think the reality is that most New Zealanders would like to see homelessness and poverty completely banned as well, at least in areas of high pedestrian traffic, in main shopping areas like Queen Street and large shopping malls around the Auckland area.”

The National Government has promised to pass the bill under urgency and will likely move to evict the homeless from their homeless street homes as early as next week. When asked what solutions the Government were looking at for the causes of homelessness, the Prime Minister replied:

“Well, we’re also looking to ban all complex problems, but that won’t be until next term. In the meantime the New Zealand public can decide if they agree with our approach. However I think most people would agree, life is complex enough already.”

The Bill will likely enable the Government to ban begging, homelessness and to begin evicting people from the streets. It is also understood to include provisions for a public private partnership to be set up to allow private contractors to build and rent streets to the homeless at no extra cost to the taxpayer. These streets will be far away from anyone who might be upset by the reality of poverty and suffering in New Zealand and may even be best placed underground.