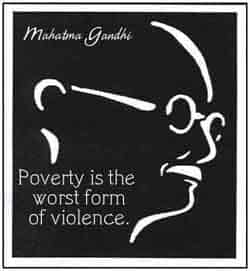 In the last couple of weeks, we have once more been subjected to another round of “beneficiary bashing” thanks to a pronouncment from the Minister of Social Development, Ms Paula Bennett,  that New Zealander’s on a benefit are “abusing the privilege” and going on overseas holidays at a shockingly high rate.

Sadly it’s not unusual for this Government to level accusations at “beneficiaries” based on fairly shaky data.  But while pundits have been suggesting that those in power do this as a distraction technique, using these stories to predictably shift attention away from more tricky matters, I wondered: what is the prejudice that exists in the constituency that this hooks into?  Why do some people see those on a benefit so negatively?

Mark Sainsbury and I talked about this on Radio Live this week. (Click here for audio of the interview)

I think it’s important to recognize that one of the unfortunate side effects of a capitalist, “work is value” based ethic is prejudice.  Nowhere in the west is this more clear than in the United States of America, where some studies suggest that people react with “revulsion and disgust” to those struggling with poverty, and that the strength of their negative prejudice is even greater than that of racism (Click her for the whole article).

To understand prejudice we need to understand in-group/ out-group psychology.  At the risk of over simplifying a rather large body of research, basically as human beings we’re hard wired to treat “not like me” with suspicion, and at times outright hostility.  This hostility is generally strengthened by increased “in group” identity.  Racism is the obvious example: white “supremacist” groups strengthen in group (white) identity and strengthen out group hostility (racism towards ethnic minorities.)

Modern market capitalism has created a new in group, the hard working middle class.  This in group has been created in large part by the neo-liberal philosophies so enthusiastically adopted by New Zealand politicians, influenced by the USA and the UK.  The working middle class owns their own home, have a good job, support themselves and are law abiding.  And more over, they are told that their success is because of a system that allows them to profit from hard work, perseverance and their own natural talents.  This myth is exemplified by John “born in a state house” Key and Paula “single mother done good” Bennett.

But it is a myth.  It’s a myth because our own egos (some more than others) simply don’t allow us to see or acknowledge the role that luck, the help and support of others plays (including the government) and this help is not only necessary, but vital in individual successes.  It’s also uncomfortable to acknowledge that “just” being Pakeha, or male, or born into a non-abusive or non-neglectful environment, also gives people an advantage.  And this is also, obviously, luck not talent.

The flip side of this myth is: “if you’re poor you must deserve it”.  It’s the logical inverse of “hard work equals success.”  And it’s this logic that drives welfare policy and the recent welfare reforms that see work as the only “treatment”, and the ultimate, or only measure of success.  This philosophy also creates some of the more bizarre and de-humanising behaviours displayed by WINZ of late, like case managers jointly rising to their feet and applauding when a “job-seeker” finds work. (Click here for the whole story)

The research also shows that the strongest predictor of a lack of social mobility is income inequality.  And guess what has recently been steadily growing in New Zealand?

“Despite historically being one of the developed world’s most equal societies, that changed between the mid-1980s and mid-1990s, when income inequality accelerated, Rashbroke said.  In 2010, New Zealand was ranked 20th among 34 OECD countries in terms of income inequality… …one of the biggest problems with entrenched inequality was the way it “makes a lie” of the idea that there were equal opportunities.” (Click here for the whole article)

To look for solutions, we have to return to Social Psychology, and some science to see what breaks down prejudice.  The research says what helps is increased knowledge, reducing anxiety about contact between those that are different, and increased empathy.  But how does that apply here?

It’s tricky, not only because of a lack of knowledge, but because of the level of cultural and individual denial.  Because to empathize with those less fortunate, we are forced to face the very real and scary prospect (if you’ll forgive the theology) that “there but for the grace of God go I.”  Illness, redundancy, loss of a spouse or a partner leaving someone literally holding the baby.  This is what the reality of being forced into a WINZ office is really about.  It is not about character.

And if you want to read about the actual reality of it, you can do no better than to read the blog of one Ms. Sarah Wilson, a.k.a. @writehandedgirl.  She honestly, and bravely at times, has documented her struggle with receiving fair treatment from a system that seems increasingly bereft of empathy, or at times even just normal human decency.  To quote her…

“I’m tired. I’m so tired of this. I almost want to force myself to go back to work because trying to stay on a benefit is more stressful than working full time with a debilitating chronic illness.”  (Click here for the rest of the post)

If you’ve had similar experiences yourself (and everyone I talk to who has had dealings with WINZ has) you might want to read her excellent resource on what your rights are, and what support is available.

And if you’re still doubting how complicated and entrenched our attitudes, and our apathy is to those less fortunate are, then watch this.  It says it all really…