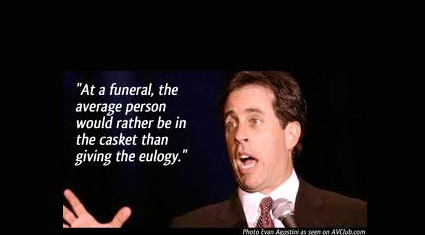 Better dead than… give a speech?

That’s what most surveys say anyway, time and time again when asked about their fears people rank public speaking as number one, and death usually comes in around four or five.  But how can we make sense of such an extreme and consistent response?  Wallace and I talked about this on his Sunday Morning show on Radio Live this week.  (Click here for audio of the interview…)

Why then are we so afraid of giving a speech?  Well when you dig a bit deeper you find that what people are actually afraid of is being embarrassed, making a fool of themselves or otherwise being uncovered as incompetent or flawed in some way.  Some people also end up simply being afraid of feeling anxiety, or others noticing that they are anxious.

The core problem here though is shame, and the power of the social emotions.  We are fundamentally herd animals.  Humans need other humans, and many of our emotions evolved to moderate and guide us in our social interactions and to maintain our connection with the group.  And for most of human history a human being on it’s own was a dead human being.  So shame, and the fear of exclusion or judgement by a group of people, can have an incredibly powerful effect over our behavior.  It’s actually being shunned or judged negatively by the group that feels like a fate worse than death.

So what to do if you have to give a speech?  Well knowing that this response  is normal can help.  And there are also some commonly prescribed tips for overcoming a fear of public speaking:

And above all remember that your worth as a human being is not being measured by your speaking ability in that moment.  Like anything we all need practice to become good at things, and even the most seasoned public performers suffer from anxiety and nervousness before a performance.  They’ve simply learned to channel the energy to focus and prepare well.

“There are two types of speakers. Those who get nervous and those who are liars.” ― Mark Twain