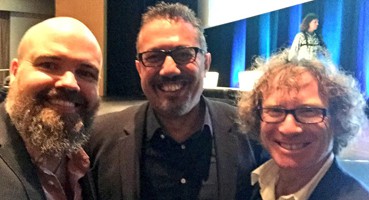 On the 9th of August I was asked to present a keynote speech at the Careerforce Workforce Development Conference, at Te Papa in Wellington.

It was a joint keynote with Mike King, on the “State of Mental Health in New Zealand.”  Below is the video of the keynote, along with Mikes keynote and the question and answer session aafter wards.

Full text of my presentation follows the videos below…

The Value of Caring

Never when I trained as a psychotherapist, over 15 years ago did I ever think I’d be “opening” for Mike King, but here we are.

And here you all are, here because in one way or another you have chosen to turn caring into a career.  I’ve often reflected over the years on what it means to be a “professional carer” and the implications for our society as a whole.  In many ways it’s a strange thing: we pay some people to care, because certain kinds of caring are difficult.

I often say to clients, when talking about goals for therapy, how long they should see me, and what they should expect, that it’s their “job to make me redundant.”

Idealistically perhaps it’s societies job to make all therapists redundant – all professional carers redundant.  But we are a long way from that point.

Perhaps further than we’ve been in a long time.

I want to talk to you today about what motivated the People’s Mental Health Review as a national project, what we found, and what the implications are for all of us as a country.

The People’s Review was about using the platform that Mike and I are so privileged to have, and in collaboration with the skills and resources of the wonderful people at Action Station, give others a voice by collecting stories.

So first let’s hear a story.  This is Robbie’s story:

“When I went to university my student debt started to pile up. The contact time with teaching staff was reduced until office hours with our tutor were one half hour per week. My anxiety became a mild depression.

In November 2016, two years after graduating from university, I was thinking about suicide and worried I might take action. I googled mental health support services and texted the Depression Helpline. They suggested I get support from a counsellor I could talk to in person.

I considered going to Evolve, who provide free counselling for people 24 and under, but they were only in a position to take on clients in desperate need of support. I spent $50 to visit my GP, which was a lot of money for me at the time. He wrote me a prescription for Escitalopram, and recommended I go to the Wellington Anxiety Specialists.

Unfortunately, it turned out that the Karori Medical Centre was no longer affiliated with the Wellington Anxiety Specialists, so I couldn’t be referred to them directly. I visited my doctor for another $50, and he filled out a form to help me get financial support from WINZ.

I visited WINZ for the first time that November. It turned out my doctor had filled out the wrong form. Unbeknownst to me, I was also eligible for other financial support because of my low income. I was given a large number of forms to fill out, and asked to provide a lot of supporting evidence. It seemed unlikely to me that a person with depression would make it through the paperwork.

I don’t get letters – I get emails, which made it difficult to prove my address. I don’t own a printer, so I made regular visits to my parents’ house to use theirs. I was lucky to have a passport and driver’s license, because I needed two forms of identification. My boss had accidentally stopped sending me my payslips, which was another obstacle. I had letters signed by landlords and flatmates. I visited the Wellington Anxiety Specialists for the second time; they signed a document to confirm that they would offer me support. I visited my GP for the third time, for another $50, this time to have him fill out the correct form. He was away at the time. I had fifteen minutes to convince a new doctor that I was at risk of killing myself.

Escitalopram can increase anxiety when you first start taking it, and by February 2017 I had still not successfully received counselling. I had an emotional breakdown, and I cried in my room. I sat thinking more seriously about suicide than I ever had before, I had a plan and I knew what I was going to do.  But then I thought of my family. I didn’t want them to find me there.

So I called my friend. The next week my parents found a way to pay for counselling. They couldn’t afford it, but they reached into their overdraft.
Last week [in late March] the money from WINZ came through”

This story was picked not because it was exceptional, in fact it was typical.  Time and time again we heard the same frustration.  A system bogged down by rules, bureaucracy where the onus was on the person who was suffering to prove that they needed treatment and support.

The Review itself was carried out from September 2016 to December 2016. Submissions were collected online and promoted via social media as well as receiving plenty of mainstream media coverage.

It was a fully independent, crowdsourced project. It has been funded by donations to the campaign, via ActionStation.

Incidentally, 500 submissions is more than most Parliamentary select committees receive, so we did alright.

The two most common themes discovered in the thematic analysis were:

First problems accessing mental health services including long wait times, and needing to be in crisis to get access to help

Second strain on workers, and other negative impacts of an overstretched and under-resourced mental health system

BASED ON THE REVIEW, THESE WERE OUR RECOMMENDATIONS:

In many ways, the bigger problems are now clearly on the public record, and the ongoing request for a review, enquiry or stock take, call it what you like, is now one of the issues firmly on the agenda for the upcoming election.

This is a good thing.

But one of the recurring themes in the stories we received was one that Mike and I were very familiar with, in fact it was the main reason we decided to launch this project in the first place.

Formally it’s summarised as “Provide a wider range of treatment options including a full range of talking therapies, and peer support – both of which people had found to be useful and therapeutic.”

What it comes down to is people increasingly feel that the system doesn’t care, or doesn’t have time to care, and that talk therapy and peer support were the two treatments people experienced as being the most attentive and caring.

Many people simply said they wanted someone to take the time to listen to them, to stop and make time for a chat.

And this isn’t just patients – staff too reported the same thing.  When under pressure the small things disappear, taking the time to sit with someone and have a cup of tea, the little moments, the conversations, phone calls.

The seemingly inconsequential things that feel, to the person on the receiving end, like someone cares.

Now it’s important to be clear, this deosn’t mean the individual workers in the system don’t care – in fact around the country in all sorts of different services are countless individuals going above and beyond to do what is needed, working extra hours, do everything they can to care.

But the system doesn’t support this.

All designed to increasingly do more, with less and less.

What has slowly gotten squeezed out, as the funds have gradually decreased, is the time to simply care.  It’s hard to quantify, it’s hard for leadership and management to measure, but this is the key point that remains unaddressed from the People’s Mental Health Review.

What we uniquely captured was those who had struggled to get in to treatment in the first place, and unlike the Ministries research (the validity of which has also been questioned by the Auditor General’s office by the way) which measures those engaged in treatment, we gave voice to those who weren’t

When their isn’t time for professional care-ers to do what they got into the job to do in the first place: they burn out, and worst case they leave the system.

And when people don’t feel cared about they don’t get better.  There is a ton of therapeutic research that makes this point very clearly: when people feel connected and that they have a good relationship with their therapist and professionals, they recover.

When it isn’t possible to put the relationship at the middle of treatment, then treatment is always doomed to fail.

So as you listen to the election polices rolled out across the political spectrum this election, ask yourself this: does this approach put caring front and centre?

And no matter where you work, take the time to care.  That kind word, that moment to just sit and have a cup of tea, that helping hand, ultimately that’s what makes the difference.

Increasingly I believe it’s the only thing that does: for all of us.

Is National right about e-therapy for mental health?