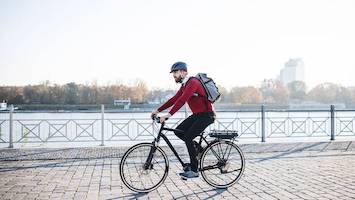 Four weeks ago I bought an electric bike. I used to ride a lot, especially commuting to work, but becoming a parent made my own mortality seem a little more real – and precious – so I stopped about eight years ago.

But a month after getting my new bike, I’m hooked again. Perhaps it’s the exercise, and resultant endorphin hit, or maybe it’s the fresh air, quietly riding to and from work, largely via back streets, but it feels slower and more relaxing – even though the reality of Auckland traffic means the commute takes me no longer.

Despite a few people’s comments about riding an e-bike (“don’t you want to pedal?”) it feels like good exercise. The research I’ve read suggests that it is, and that actually it’s comparable to riding an unassisted bike, if only because it feels easier, so people ride more, and ride further.

There’s also no question it’s good for my mental health. Driving less makes me realise that one of the things that happens when I get behind the wheel: I’m prone to getting angry. Perhaps it’s just an Auckland thing, but travelling just seems more frustrating in a car.

The frustration is understandable. Our roads are overwhelmed, motorists are increasingly waylaid, and existing public transport is bursting at the seams.

And the opposition – in it’s newly released transport policy – now seeks to make cyclists a target for this frustration, a move that is cynical divisive politics at its most nasty.

Anger is an emotion that shows up when we’re thwarted in reaching a desired goal, are under attack, or are in pain. It’s a natural, albeit pointless, response to being stuck in traffic. Anger looks for a target, an enemy to attack. Road rage levels this anger at other motorists.

But with traffic congestion, the obvious uncomfortable fact is that we are all the problem. Sitting individually in our cars, we collectively cause the bottlenecks. Of course this is not an individual problem to solve, but neither is it easy to take responsibility for the part we all play in the snarl ups that inconvenience us.

My personal experience of riding again has been largely positive, in fact I feel much safer than I did eight years ago. Most drives are courteous, and having ridden much of my life in traffic, I try to reciprocate.

However I don’t hesitate to ride around town in what ever was is safest. Sometimes that means using cycle lanes, sometimes it doesn’t. At times the safest way to cross a main road is with pedestrians.

Like everyone, I just want to get home alive and in one piece. Forcing me to stick to bike lanes, that at times are so ill-designed as to be more dangerous than using the roads, or even footpaths, is madness. As is suggesting that cyclists are in some way responsible for traffic problems. Making some of the most vulnerable road users a target for motorists frustration is downright irresponsible.

Cycling needs to be encouraged, for both transport and health reasons. No one is forcing you to ride a bike, but if you’re sitting in your car perhaps see every cyclist as one less car getting in your way, rather than an impediment to your own commute.

We all need cities that are safe for people of all ages and means to get to and from work, home and school no matter how we choose to get there.

The danger of alcohol at Christmas