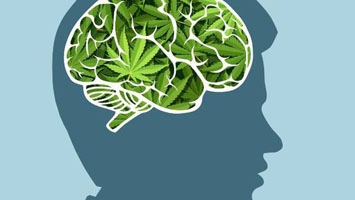 Does cannabis cause psychosis?

As the debate continues to heat up around cannabis legalisation, the facts start to go missing. Arguments get simplified, sides get taken, and the nuance and evidence slides out of the conversation.

Nowhere is this more the case than the question “does cannabis cause psychosis and/ or schizophrenia?”

This is a question that divides people, creates fear, and sows misinformation. It’s also not possible to answer with a simple yes or no.

Firstly, what is psychosis? Well it’s a serious symptom of mental distress,marked by a disconnection from reality. It can include visual, auditory and even olfactory hallucinations, extreme paranoia and “bizarre” ideas and beliefs. While some people can experience psychosis in times of extreme distress, if these symptoms persist it can be an early sign of schizophrenia.

We talked in some depth about schizophrenia this week on “The Nutters Club ” on NewstalkZB.

It is a serious and chronic mental illness that affects about one per cent of the population.

The evidence is clear that schizophrenia has a genetic component, but having “the genes” for the disorder is not a life sentence: it’s possible to have the genetic predisposition and not develop symptoms.

Increasingly we understand that for complex disorders like schizophrenia, it’s a combination of factors – genes plus environment – that leads to the person developing the illness.

These environmental factors can be a number of things, from chemical exposure, trauma, bullying, alcohol, and yes – cannabis.

However, there are two important details about the impact of cannabis. Firstly the research is starting to get clear that the link is between heavy use (regular, daily) of high strength (high levels of THC) cannabis. The risk also seems to significantly decrease as people age, and even disappears altogether after about 25.

And while some of the details of this research are still hotly debated, the one thing that most agree on is that high THC cannabis is dangerous for people with an underlying risk of developing psychosis.

It’s also worth mentioning that alcohol – and other drugs – are also implicated, with alcohol accounting for far more mental heath problems than cannabis – including psychosis – as well as being implicated in around 25 per cent of completed suicides.

Given this research, there are some obvious things that should be considered. Reducing the strength (the level of THC) in cannabis would be a good start. And without getting too technical, there is also some research that suggests increasing CBD, the other main active ingredient in cannabis, is protective – it decreases the negative impacts of THC.

Of course, black market cannabis – currently on sale in New Zealand – tends to be high in THC, and low in CBD.

We should also restrict access to adolescents as much as possible and educate people with real information: about harm minimisation, the importance of controlling and moderating use, and the potential impact on mental health.

None of this is possible when the drug is prohibited. There is no incentive for gangs and others involved in the currently illegal production of cannabis to reduce the strength, and somehow I doubt they’d be willing to hand out pamphlets with tinnies explaining the potential health risks associated with the drug.

But with legalisation and strict regulation we have the opportunity to regulate the strength – like we do with alcohol – limiting THC levels, and making it much more difficult for young people to get their hands on.

Will this prevent people who are at risk of mental health problems smoking cannabis?

Not entirely, but right now we are effectively leaving the mental health of our young people who choose to try cannabis in the hands of gangs and drug dealers.

The Cafe: Kiwi Men and Alcohol