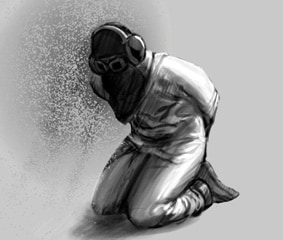 Recently the American Psychological Association (or APA) has been in the media due to a report that has confirmed that psychologists have been involved in the approval of so called “enhanced interrogation techniques” (spin for psychological torture), despite many years of denials.  Mark Sainsbury and I talked about this on his Radio Live Sunday Morning show this week.  (Click here to listen to the interview)

The history of this goes back to the events that unfolded after 9/11, the pursuit of terrorists and the establishment of Guantanamo Bay.  The most infamous example of these interrogation techniques is water-boarding, where the suspect is questioned whilst experiencing “simulated drowning”.

Both the Department of Defence (DOD) and the Central Intelliegence Agency (CIA) have used such techniques, and both employed psychologists to help “sign off” on the suitability of these techniques as fitting within the existing rules for questioning and interrogation, as well as directly participating in such interrogations.

Now, after the release of an in depth investigation into these events dubbed the “Hoffman Report” (click here to download the complete report), it is clear that individual members, and indeed the APA itself, have deliberately tried to cover up these activities.  Perhaps the only credit we can give the APA is that the organization itself ordered the report, albeit after the story was broken in late 2014 by journalist James Risen.

Specifically the Hoffman Report has looked at whether APA officials colluded with DoD, CIA, or other government officials “to support torture.”  At two different times the organization appears to have pushed through changes to their own ethics policies to allow close involvement between psychologists and these agencies: in 2002 and 2005.  Specifically…

“In 2002 – the critical year for the Bush administration’s embrace of torture – the APA amended its longstanding ethics rules to permit psychologists to follow a “governing legal authority” in the event of a conflict between an order and the APA ethics code.” (Click here for the whole article)

“In June 2005, APA convened a task force on the topic. The task force issued a report, largely drafted during the three-day meeting by the APA Ethics Director in consultation with the task force. The report concluded that psychologists could ethically play a role in such interrogations and articulated some ethical guidelines regarding their participation. Less than one week later, the APA Board of Directors, in an emergency session, adopted the report as APA policy and publicized it…

…[the] APA made these ethics policy decisions as a substantial result of influence from and close relationships with the U.S. Department of Defense (DoD), the Central Intelligence Agency (CIA), and other government entities, which purportedly wanted permissive ethical guidelines so that their psychologists could continue to participate in harsh and abusive interrogation techniques being used by these agencies after the September 11 attacks on the United States.” (Click here for the whole article)

So what happens next?  Well many have called for not only the removal of the licenses of the individuals involved, but also criminal convictions.  Some prominent psychologists like Dr. John Grohol (founder of the psychology information and blog site psychcentral.com) have publicly stated their intent to resign from the APA if these findings aren’t taken seriously.  And at least one senior member of the APA appears to have been removed from their position…

“Several officials are likely to be sacked. Already out, a past APA president confirmed to the Guardian, is Stephen Behnke, the APA’s ethics chief and a leading figure in recasting its ethics guidelines in a manner conducive to interrogations that, from the start, relied heavily on psychologists to design and implement techniques like waterboarding.” (Click here for the whole article)

However in my view this last decade has been such a gross violation of all that psychology as a profession holds dear that it will take more than commissioning a report and sacking a few high profile members to fix this.  The APA must make this process, and the changes they need to make, transparent and open.

And in doing so perhaps they can also show not just the United States, but the wider western world how to step back from the precipice of using the threat of terrorism as an excuse to abandon our moral compass, and thereby engaging in the very behavior we espouse to stamp out.

Put even more simply: “First, do no harm.”

The Strength to Survive