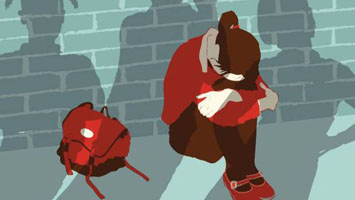 Everyone wants to support the victims of bullying. Psychotherapist Kyle MacDonald points out why the antagonist in your child’s life needs compassion too.

In case you’ve been wondering why there’s been a lot of talk about bullying this week, tomorrow is Pink Shirt Day, a fundraising and awareness day about bullying.

According to an Education Review Office report, released Monday, bullying levels in schools remain worryingly high, despite programmes instituted to combat it.

But what do we do about the bullies?

It’s natural, as a parent, to be protective. Should you find out your kid’s getting bullied, most of us would instinctively want to wade in and sort it out, one way or another. Whether that be by talking to the kid’s parents, or maybe even giving them a taste of their own medicine.

Gary McCormick even says he went as far as going down to his kid’s school and assaulting the bully (“I kicked him in the backside”) to teach him a lesson.

It might make you feel better, but bullying isn’t solved by more bullying. You can’t bully a bully into stopping bullying.

For most, bullying, or “acting out” with aggression is a sign of distress. Bullies don’t intimidate and hurt other kids because they’re happy. They do so because it is a way to stop feeling the distress they feel, even if only momentarily.

And no, it’s not as simple as “kid gets bullied by their parents, and then bullies other kids”. It isn’t just about getting hit, or yelled at, although for some that might be the cause.

It also isn’t just a “lower socio-economic problem.” Some of the best schools have bullying problems, because the unrelenting pressure and expectations on our kids to be perfect is also a form of bullying – or is at least deeply critical, and harmful.

It’s just too easy – too tempting – to see the behaviour as the problem, to punish the bully, and be done with it. We do that too easily in New Zealand – punish without wanting to understand – because we think it solves the problem.

We need to demonstrate compassion.

Ultimately, for bullies – indeed for all of us – the worst bully will be the one in our own head. That self-critical voice that lays into us when we make a mistake, or fail to live up to the pressure and expectations that have been put upon us by society, our teachers, schools or our families.

And when we punish the child acting badly, ultimately all we do is give that self-critic more ammunition.

That’s not only harmful, it can be deadly.  (Click here to read the article via the NZ Herald…)