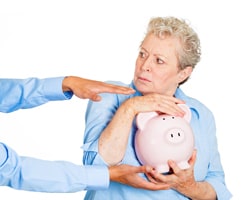 Many people rightly assume that “domestic violence”, or “intimate partner violence” as we now tend to call it, is defined by physical assault.  But as anyone who has worked in this field knows that is only one of the many ways that is is possible to exert power and control over your intimate partner, and it isn’t uncommon for physical violence to not be that frequent, but for power and control to permeate every aspect of the relationship.  Controlling who she sees, where she goes, what she wears.  Isolating her from her family, her friends.  Yelling, intimidating and verbal abuse.

As well as controlling the finances, including her income, and using money as a way to exert power and control.  You want to make sure she keeps her mouth shut? To make sure she doesn’t have the resources to speak out, and get away? Don’t let her have any money, and threaten to take it away if she steps out of line.

It’s ironic then that aggressively controlling funding has become such an entrenched and consistent way for this Government, John Key’s Government, to silence dissent in the NGO and academic sectors.

The inclusion of gagging clauses in contracts has now become common place, and the attempted closure of the Problem Gambling Foundation for being too political, despite health advocacy being one of it’s roles, is a matter of public record.

But towards the end of last year we all saw how the White Ribbon Trust was unwilling to speak out, in any form, against one of its ambassadors participating in a prison rape joke on The Rock radio station.  That ambassador was of course John Key.

We now know why they didn’t: Power and control.

Just this week a story ran in the Herald, outlining the very precarious financial position of the White Ribbon Trust.  This story was based on an Official Information Request by a member of the public, and makes clear that the funding for the White Ribbon campaign has been slashed, and that any further future Government funding is contingent upon White Ribbon fund raising, dollar for dollar, what the Government gives.

Simply put White Ribbon were unable to do their job, and censure one of their ambassadors because their funding position is so precarious that it could be cut altogether at the end of this funding year.

Now I would even let you call me paranoid if this wasn’t such an established pattern by this Government of gagging and silencing  dissenting points of view, whether it be in the health sector, the voluntary welfare sector or academia.

It honestly sickens me that debate and participatory democracy continues to be so actively stifled in this country.  And the irony that John Key’s government would use the very same tactics an abuser would to silence dissent, and even with the very agency tasked with speaking out about abuse and violence, is frankly terrifying.

It’s also true that this Government is “talking tough” on the problem of domestic violence.  Just today the Minister of Justice, Amy Adams, published an opinion piece on the Stuff:

“As communities and individuals, we all have a part to play.
Together we can make a real difference to victims and break the cycle of violence within families and across generations.  The home should be a safe place for all.  Help us make that a reality. Join in and stand up against family violence.”  (Click here for the whole article)

So if John Key refuses to do the decent thing and resign as an ambassador for the White Ribbon Campaign, then he could at least put his money where his Governments mouth is, and guarantee its funding.

Time to stand up John.

Action Station is currently running a petition asking the Government to increase funding for sexual and domestic violence services in NZ. To see the petition click here