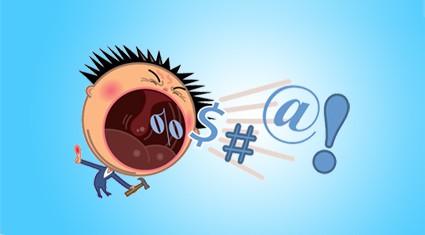 F##k it!: Why swearing is good for you

Why do we swear, and how might it actually be a practical and helpful behaviour?  Jessica and I from Radio Live discussed this on Sunday morning, and how to best swear for maximum gain, in your life.  (Click here for audio of the interview…)

It’s also true that without swearing some things become harder to say.  When we swear we express emotions in a kind of shorthand that makes it much easier for other people to understand what we’re on about.  It enables us to be angry without violence for example.  It’s also a useful social marker: we tend to swear more with people we trust and feel relaxed around.

Interestingly it also seems to be as old as the spoken word.  Different cultures have different taboo’s, so the words that are considered swear words have changed.

But humanity has always had profanity.  For instance in the middle ages to blaspheme was considered highly offensive, but words related to bodily functions and sex were less offensive because there was less privacy and less concern about those things being shameful.

So more recently, psychologists have investigated what happens in the brain when we swear, and why might it be a needed human response?

Well, it seems that foul language helps us tolerate pain.  Most people swear when they hurt themselves and it seems in doing so we are actually changing how our body experiences pain:

“The study… …measured how long college students could keep their hands immersed in cold water. During the chilly exercise, they could repeat an expletive of their choice or chant a neutral word. When swearing, the 67 student volunteers reported less pain and on average endured about 40 seconds longer.”

However it also seems we can build up a tolerance for it.  The effect was most strong in below average to average swearers, and seemed to disappear completely for those who were above average expletive users:

“There is a catch, though: The more we swear, the less emotionally potent the words become, Stephens cautions. And without emotion, all that is left of a swearword is the word itself, unlikely to soothe anyone’s pain.”  (Click here for the whole article…)

Stephen Fry has become somewhat of an expert on swearing.  A skilled comedic curser, he has more recently made a documentary series for the BBC about language, with an entire episode dedicated to swearing.  And here’s what he has to say…