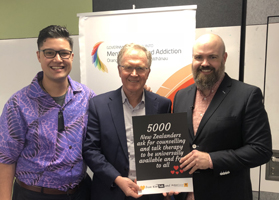 Today the Government Inquiry into Mental Health and Addiction officially accepted  the Free Counselling for all Kiwis: Open Submission to the Mental Health Review.

Over the last three months more than 5000 people have signed the Open Submission calling for counselling and talk therapy to be provided free to all Kiwis.

Organised by Psychotherapist Kyle MacDonald, one of the people behind the People’s Mental Health Review, says the open submission recognises the ongoing problems so many people face with access to talk therapy and counselling which is widely acknowledged as the first line treatment for depression and anxiety, alongside other mental health problems and addictions.

“I would like to thank the Inquiry for being so willing to accept this Open Submission, and in so doing validate the over 5000 people who singed in support of the call for Free Counselling” says Kyle MacDonald.  “Even though the People’s Mental Health Review was released well over a year ago now, what we continue to hear is the situation has not improved, and many people are going without the treatment they so desperately need.”

The Government Inquiry has called for practical solutions from the community, and this along with a range of other Open Submissions hosted by Action Station, co-organisers of the People’s Mental Health Review, have presented the Inquiry with just that.

“It may seem to some like a “pie-in the sky” idea, but mental health is one of the few areas of health where frontline, proven treatments are not funded and widely available,” says MacDonald.  “Personally I’ve welcomed seeing the Green Party’s policy put into practice by the coalition government – namely running an initial pilot of free counselling for people aged 18 – 25 – but this policy doesn’t go far enough. Kiwis should be able to access the mental health treatment they need, when they need and where they need it.  Lack of access to treatment was the number one problem identified in the People’s Mental Health Review, and I’m sure that has been echoed in the public meetings as the panel have toured the country over the last three months,” says Kyle MacDonald.

The acceptance of the submission in no way implies endorsement of its content or intent. The submission will be considered carefully, by the Inquiry in its deliberations, like all other submissions that are received.

Why we need to end the ‘stranger danger’ myth

The Nutters Club: Finding self-belief after trauma, P and prostitution