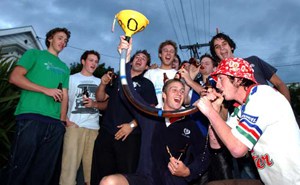 I love it when a piece of research  makes you realise that common wisdom might be common, but not that wise.  This ongoing research from Australia has shown quite clearly that the earlier children are given “sips” of alcohol, the higher the chances they will go on to develop problem drinking habits at a young age.  Mark and I talked about this research, and the problem of youth drinking, on the Sunday Morning show on Radio Live this week.  (Click here for audio of the interview)

So what did the study show?

“The researchers found that 15 and 16-year-olds who were given alcohol by their parents at age 12 and 13 were three times more likely to be drinking full serves than those whose parents had not given them alcohol… … Professor Mattick said the study found that “early parental supply of alcohol through school years 7 to 9 was the single biggest predictor of drinking in year 10.
“It was more influential than family circumstances, individual psychological risk factors and peers.”  (Click here for the whole article)

Give kids alcohol: they’re more likely to drink.  So why is this a problem?  Well the age of commencement of drinking is also one of the strongest predictive factors for adult alcohol dependence.  It’s also true that alcohol use by teenagers is associated with higher levels of motor vehicle accidents; injury; accidental death; increased risks of crime; increased risk of sexual risk taking; and increased mental health problems and suicide.  (Click here for the whole article)

But what about the French approach, I hear you say.  Well more bad news I’m afraid, the French Drinking culture is a myth.  The myth goes, the French all drink wine moderately and introduce their children to drinking wine at a young age, and it works for them.  The real story…

“A quick look at the statistics shows if you drink like the French, you die like the French. Per capita, France has the sixth highest alcohol consumption rate in the world, with 13.5 litres of pure alcohol consumed per adult per year. New Zealand is 27th, with 9.2 litres. Alcohol is involved in half of the deaths from road accidents in France (31 percent in New Zealand), half of all homicides and one-quarter of all suicides. Rates of cirrhosis of the liver are more than double our own.” (Click here for the whole article)

We also know quite a bit about what helps to reduce youth drinking, but translating facts into good policy is another matter.  The approaches that have been shown to be effective when it comes to reducing harms from alcohol for young people, are also obvious, when you think about it.  They include:

And I would add to the list, and this can be challenging for some, that if you’re concerned about your teenager’s drinking the first thing you should do is be honest with yourself about your own drinking.  “Do what I say, not what I do” is never an effective parenting approach, nor does it inform good policy.