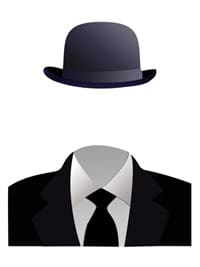 Have you ever wondered what it would be like to be invisible? I know I have, it’s one of those games you play as a kid imagining what superpower you would like to have. A recent study showed that the illusion of being invisible helped people overcome their social anxiety when confronted with a crowd. Mark and I talked about this research, and its implications for treatment this Sunday on his Radio Live show.  (Click here to listen to the interview)

In the experiment subjects wore 3-D virtual reality goggles which displayed either video footage of a mannequin when they looked down at their own body, or footage of empty space. People who saw empty space when they looked at their own body experienced an illusion of being invisible, and this illusion was confirmed through a number of different experimental conditions.

It’s pretty amazing when you think about it that our brain can be tricked in this way, but it’s not new. Psychologists have been using illusions to treat difficulties with the after effects of amputation for some time. “Phantom limb syndrome” is a well recognised condition for people who have experienced amputation, where the illusionary pain and irritation of the non-existent limb can be very distressing for people. Using a visual illusion which tricks the brain into seeing the missing body part can help people deal with the pain and adjustment of amputation.

In this recent experiment researchers found people don’t experience social anxiety when they felt invisible. I know from my own experience that people with social anxiety often wish they were invisible and so the idea, at least in theory, makes sense.

So how did they test this? Well the subjects in the experiment were told to look up, where they then saw a small group of people staring at them with serious expression on their faces.  Those who experienced the invisibility condition showed no physiological symptoms of anxiety, as opposed to the subjects who were in the mannequin and visibility (i.e. not invisible) versions.

All very interesting, but how is this actually useful? Well one of the experimental treatments for social anxiety is to help people confront their fears via virtual reality environments. Using this technology to help people gradually expose themselves to their anxiety has shown promising results, and starting with the experience of being invisible when presenting a speech or talk in front of a crowd may be a very helpful place for people to start this exposure therapy.

It may also help us understand the way in which the brain, and the mind, experience and process our understanding of the body in space, and while might not actually be the superpower of invisibility, it’s an amazingly creative way to help people overcome what some can be a very debilitating condition.