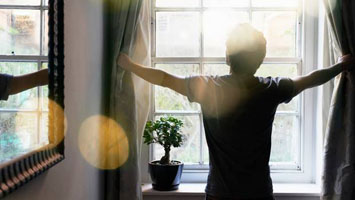 Is early rising really better for your health?

Just like everything, self-help ideas are subject to trends, and the latest bright idea seems to be that getting up early is the “secret” that all billionaires share.

And indeed a recent study did seem to suggest there is some evidence at a genetic level for improved wellbeing of early risers, or “larks.”

I’m sceptical though, and not just because I’m naturally an “owl,” and most of my life have had to drag myself – slightly reluctantly – out of bed every morning.

However, the science suggests that our natural body clock – or circadian rhythm – is largely hardwired, and there are genetic combinations that can predict whether one is an early riser, or not. Moreover, the genes for waking early are correlated with greater wellbeing overall.

Conversely, the genetic combination that predicts late rising, or “owl” behaviour predicts a higher risk for depression and other mental health struggles.

It’s enough to make me want to go back to bed.

Never slow off the mark (perhaps because they all get up so early) the online self-help market has swung into gear. I’ve lost track of the number of sponsored posts that have offered me various ways to get up earlier and “get more time in my day” become more efficient, and generally a better human being.

All just by being conscious at 4am, apparently.

My most productive hours are between 10am, and around 8pm. Now that I am privileged enough to set my own work hours, this is generally the hours I work. It suits me, but it got me thinking, perhaps it isn’t getting up late that is the problem, perhaps the problem is the world is run by a bunch of larks, all springing out of bed at 4 am and inflicting their cheerful can-do attitude on the rest of us.

Adolescence is a prime example. In fact, science also tells us that whilst we’re teenagers not only do we need more sleep, but it’s natural for your circadian rhythm to slip, meaning we tend to rise later and stay awake later. Expecting young people to be alert and learning at 8.30am is fighting their biology. But we demand it anyway because that’s the way the world works.

What if this is the problem?

Because correlations only tell us two things are related, not how. What if the problem for owls like me it that it’s actually harder to succeed because the world is set up against us?

It’s not like there’s anything morally wrong with sleeping in, and working until midnight if one does the same amount of work as someone who has done half their day before I even get out of bed.

Personally, I’ve had enough. It’s time to stop this rampant “owl-ism.” Laziness is a label to reject and challenge.

So while the larks may run the world, because they’ll always get there first, we owls can still get up to mischief once they’re in bed.

Anyway, isn’t that when all the fun happens?

The Nutters Club: Overcoming anxiety and PTSD from sexual abuse

The Nutters Club: The long shadow of depression