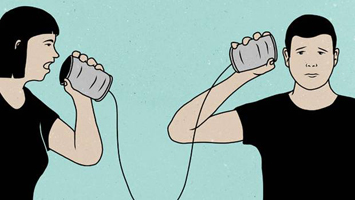 Is the way you communicate ruining your relationship?

There’s a tipping point in life where, despite your own image of yourself as “youth adjacent”, you start to feel the generation gap. Nowhere has this been more apparent to me than when I talk with younger clients about dating culture, dating apps such as Tinder and Bumble, and the role of devices, social media and digital communication in relationships.

Oh, and Snapchat. I just don’t get Snapchat.

Recently I discovered the Stand-Up Comedy section of Netflix. I’ve always loved the way great observational comedy cuts to the heart of a matter and can really force you to think differently about things which seem every day.

Chris Rock is a comedian who has, at times, made me feel very uncomfortable with his outright offensive, sometimes bullying humour. But a bit in his recent show does a good job of highlighting the difficulties of modern love.

He talks about how his father would go to work all day and not talk to his mother until he got home that night. As a result, they would actually miss each other. The bit is about how impossible it is to ever miss each other now. And how your partner is constantly in your pocket.

Perhaps – in a desperate bid to remain relevant – I can embrace this as an evolution of how we relate. It isn’t all bad news. In fact, my experience as a partner and father is such that the feeling of being tethered is also a feeling of being connected.

It’s pretty normal for people in therapy to recount conflict or arguments with their partners. In fact, it can be very useful to think these through and reflect upon our own feelings and actions.

But I have to remind myself from time to time to check how this conversation took place. A few years ago I realised my assumption that these were face to face arguments was often wrong. These were increasingly texts or online messaging arguments.

No matter how much I embrace technology I can’t see that this is ever a good idea.

The problem with text messaging in particular is, because of the absence of any context or body language, we don’t witness the emotional impact of what we say. In doing so we can be much more hurtful than we would be face to face.

It’s also transactional: that back and forth nature lends itself to argument. Also having a “transcript” of an argument – which we can dissect and isolate to prove just exactly why the other person is wrong – isn’t a great idea either.

But it does highlight the paradox of all this digital relating: while we are more connected to each other than ever, we can also use technology to avoid real relating. We are both closer and further apart than we’ve ever been.

That’s why Chris Rock’s bit got me thinking about the necessity of missing each other, and the value of holding grievances, disagreements and hurts until we can talk face to face.

Because sometimes the best thing for a relationship is to not be together – at least for a few hours. We calm down, and the grievances fade.

So yes, arguing by text messaging is a terrible idea, and you should stop doing it. But maybe we should all ignore our partners a bit more too. At least until we calm down and start to miss them.

The Nutters Club: Recovery from a Prescription Drug Addiction

The Nutters Club: Seventy years of Alcoholics Anonymous in NZ