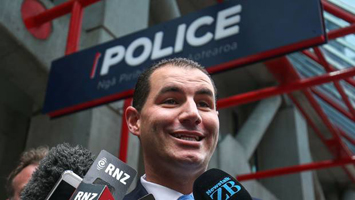 There is a comfort in hate. In raging against one’s enemies; those we see as more despicable, more guilty than ourselves. The Romans clearly knew this when they built the Colosseum as a way to both entertain and pacify a population.

We now live in an age of Twitter pile-ons, 24-hour news, and tribal politics. We have become gladiators only too happy to leap on an opinion, or a way of seeing the world we disapprove of, to vilify and belittle.

We celebrate and elevate many of its most skilful proponents to positions of power: what else is a debate than a public duel? Albeit with words, not pistols.

At an individual level we can use hate to sure up our sense of belonging and connection to the group we are part of by rejecting, punishing and attacking those we see as belonging to different groups.

We hate others to feel better about ourselves.

Politics, of course, provides no shortage of targets for our hate. Indeed the week’s events involving Member of Parliament Jami-Lee Ross made for robust, heated, tribal, political drama – right up to the point where it was announced he was undergoing mental health treatment.

Now of course for some, the hate continued to flow. But for most the tone of the conversation quickly turned from passionately vilifying his (and many other’s) character, to awkward, perhaps even forced, concern.

Adversarial politics increasingly seems set up for this kind of outcome. And I’m not suggesting for one moment that Mr Ross’ alleged abuse of women and misuse of power be excused.

But It has made me wonder whether those of us who bray for political blood are both responsible for the events that made this sort of abuse possible, and the fallout now visited upon Mr Ross – and the alleged victims of his behaviour.

Perhaps it tells us something about ourselves as a nation. Because we can’t relish the opportunity to hate without also accepting – and taking responsibility for – its inevitable consequences.

We can’t advocate for better mental health for all without acknowledging the role that abuse of power and bullying plays in the emotional wellbeing of our communities.

And we can’t have a more caring and compassionate society, while at the same time ignoring – even encouraging – abuse at the highest levels of power.

Because while hate can be enjoyable, the pleasure is fleeting. Compassion is easy for those we love and care about. To extend that same compassion to those we revile is deeply challenging. But compassion for our “enemies” doesn’t mean an absence of consequences for bad behaviour.

It just means striving to treat everyone with respect and human decency – especially those who don’t return the favour.

The Nutters Club: Shift work to suicide attempt through to hope and stability

The Nutters Club: Dealing with failure and rejection