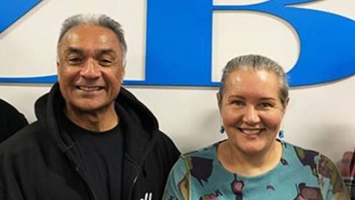 Last Sunday, November 25, was the International Day for the Elimination of Men’s Violence Towards Women. This is a day we mark in New Zealand as White Ribbon Day. It aims to end men’s violence towards women by encouraging men to lead by example and talk to other men.

On the Nutters Club on NewstalkZB we fittingly had Eteuati Ete – one Half of the Comedy Duo “The Laughing Samoans” – and wife Mele Wendt as our guests.

Ete, who had been physically abusive in his relationship, talked about how he had overcome, with help and support, his violence.

And how Mele came to forgive him.

There is no doubt that New Zealand has a deadly problem with relationship violence. And there is also no doubt that the awareness raising efforts of organisations like White Ribbon are invaluable, and necessary.

But it can also be too easy to buy into the idea that violent men are bad men, that bad men will always be bad men, and that the world is divided into bad men and good men.

If only life were that clear cut.

At the heart of intimate partner violence is not anger, but control. The desire to control the person’s behaviour, their views, opinions, what they wear, who they speak to and what they feel.

This is the defining feature of domestic violence.

What ultimately needs to be controlled though is not the other person’s behaviour. It’s the terrifying, dangerous feelings that being close to someone can – for some men – cause.

It’s the fear of being vulnerable, of feeling small, of being out of control, of feeling shame and hurt, that actually drives the need to control the other, and in turn, the violence.

Explanations are not the same as excuses.

And let me be crystal clear: there is no excuse for violence towards one’s partner. The correct response to violence is to create safety for the victim, and to hold the perpetrator to account.

But we also desperately need to talk about recovery, and hope. We need to not only say “It’s Not OK”, but to also say “You can be OK, and here’s how.”

In Ete’s case, he talked openly and movingly of his personal work, through therapy and couple’s counselling, that lead him to understand that an extended separation from his parents, from the ages of 2 through 4, left a deep emotional wound. He felt unlovable and that people he cared about were bound to leave him. These insecurities and shame fuelled his violence from a place of deep pain.

He also shared that while his partner Mele came to forgive him, it took much longer for him to forgive himself, and find compassion and love for that scared little boy, who was so prone to lash out.

He has now been sober and violence-free for nearly two decades.

So by all means let’s continue to hold men to account, and do everything to make sure that men, women and children are safe from domestic violence.

But let’s also encourage men that they are not fated to be bad men, even if they have been violent. Let’s light the path to change with both accountability, and love.

And that, is the work of all men.

The Nutters Club is on air every week on Sunday nights, from 11pm – 1am. To listen to past episodes, including the one discussed in this column click here…

The Nutters Club: The violent side behind the face of a Laughing Samoan