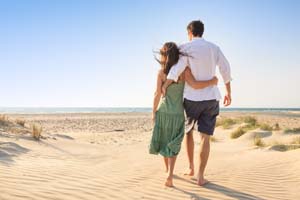 I’ve heard a lot of pop and rock songs that claim that love is the answer, but not too may psychological studies.  And that’s why this research, that Mark and I talked about on his show, caught my eye. (Click here for audio of the interview)

In this study, published in the Journal of Personality (with the very unromantic title “Recent Decreases in Specific Interpretation Biases Predict Decreases in Neuroticism. Evidence From a Longitudinal Study With Young Adult Couples”) researchers have shown how positive the effects of falling in love and being in a committed realtionship can be.

This of course being science, the results are quite specific.  What they found was that for people under the age of 30 falling in love and staying in an intimate relationship decreased what is described as “neuroticism”.  This is particularly significant because “neuroticism” is considered to be a relatively stable personality trait, it’s one of the “Big five” personality factors which is a leading model used by personality researchers to categorise peoples personality.

These five factors are: Openness to experience; Conscientiousness; Extraversion; Agreeableness; and Neuroticism, which is defined as…

“The tendency to experience unpleasant emotions easily, such as anger, anxiety, depression, and vulnerability. Neuroticism also refers to the degree of emotional stability and impulse control and is sometimes referred to by its low pole, [opposite] “emotional stability” (Click here for the whole article)

So, back to the study.  The researchers interviewed 245 couples, aged between 18 and 30, every three months over the course of close to a year.  What they found was that those individuals who initially scored high on “neuroticism” were able to better manage negative emotion and anxiety provoking situations.  Furthermore this result strengthened as the relationship developed.  The results held true for both men and women, and also appeared to “compound” between partners, that is to say if one improved, so did the other, and this positivity became a virtuous cycle.

So how does this work?

“On the one hand, the partners support each other, according to Christine Finn. On the other hand, the cognitive level, i.e. the world of inner thought of an individual, plays a crucial role: “The positive experiences and emotions gained by having a partner change the personality – not directly but indirectly – as at the same time the thought structures and the perception of presumably negative situations change,” Finn emphasizes. To put it more simply: Love helps us to tackle life with more confidence instead of seeing things pessimistically straight away.”  (Click here for the whole article…)

So can we generalise these results?  Is anxiety a cure for what ails us psychologically?  Possibly.  Over the next few blogs I’m going to be delving into this in a bit more detail and look at what psychology calls “attachment” (another un-romantic term) that is used to describe the first loving relationship we all experience:  that between infant and mother.

Lastly, at the risk of showing my age, a different kind of Cure.  A love song by a band that for me personifies neuroticism.  Enjoy…

The cost of love