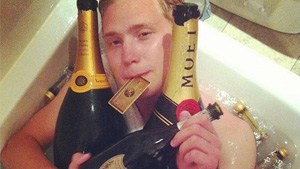 We all know money can’t buy you love, but it seems that it also can’t guarantee your children’s happiness.  Mark and I talked about some recent studies on Radio Live today, specifically about the impact of growing up in upper middle class families.  The results aren’t what you’d expect.  (Click here for to listen to the interview)

One of the things I love about science, and the social sciences in particular, is how they can throw up completely unexpected results that challenge our stereotypes and force us to re-think things.  Dr. Suniya Luthar’s research into vulnerability and resilience in young people is an example of this, and her most surprising results were initially discovered by accident.

She was studying the effects of growing up in lower socio-economic familes on young people, and as part of this research needed a control group, or a “normal” sample with which to compare her low socio-economic kids.  However once she had gathered data on a group of upper middle class, suburban teens from the North East of the US, she was shocked by what she found.  Not only was this group not a suitable “control” but on many measures they were faring worse than their poorer, inner city peers.

After further investigations, and more studies, the differences started to fall into a predictable pattern.  In prosperous cohorts, teens tended to have worse substance use problems and with all drugs.  They also showed comparable levels of delinquency, albeit of different kinds, with stealing and cheating more prevalent with the more prosperous, and violence and self defence more common in areas of poverty.  The studies also show alarmingly high rates of depression and anxiety, again at comparable rates, and in some cases higher than for poor inner city youth.

“The high rate of maladjustment among affluent adolescents is strikingly counter-intuitive. There is a tacit assumption—even among those most affected—that education and money procure well-being, and that if children falter, they will swiftly get the appropriate services. Education and money may once have served as buffers against distress, but that is no longer the case.”  (Click here for the whole article)

So what’s going on here?  Well subsequent studies have started to isolate some of the factors that seem to cause these high levels of distress in prosperous teens, and these results seem less surprising.  The first is not much of a leap, the pressure of expectation that many young people of wealthy families experience…

“The first of these potential causes of distress was excessive achievement pressures. In upwardly mobile suburban communities, there is often a ubiquitous emphasis on ensuring that children secure admission to stellar colleges. As a result, many youngsters feel highly driven to excel not only at academics but also at multiple extracurricular activities, with these pressures beginning as early as the middle school years.”  (Click here to read the whole article)

The second, at least in my experience, is also not surprising…

“Aside from achievement pressures, a second broad factor potentially salient in suburban students’ adjustment disturbances is disconnection from adults—both literal and emotional… …Most often, this phenomenon reflects not a lack of child care, but rather, parents’ beliefs that it promotes children’s self-sufficiency.”  (Click here to read the whole article)

We might prefer to think that money and opportunity will pave the way for our children’s success, but actually what makes the real difference?  The space to play and grow to know yourself, free of intrusive expectations, and the consistent and loving presence of a attuned parent.  And it’s hard to put a price on that.