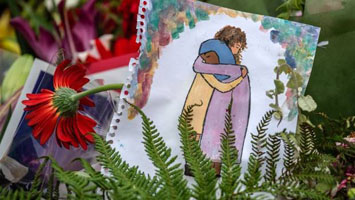 Since Friday afternoon I’ve frequently wept. For most of the weekend I felt like I was hovering – constantly – on the edge of tears.

This is just a hint of what the shock of trauma feels like.

We can – and we should – grieve and express our feelings in this time of tragedy. But we should also remember that those of us not directly affected will, soon enough, get to move on with our lives.

Not so for the victims of this horrific act of terrorism. So let’s not conflate our suffering with theirs, but let’s acknowledge we all have to take special care of ourselves – and each other – at this time.

Responses to trauma vary, but the common features are anxiety, despair, emotional numbing and a sense of things feeling meaningless. Life seems flatter, and it can be harder to find the point in doing those things that just last week seemed important.

For those in Christchurch, who lived through the earthquakes of 2010 an 2011, who once more see their city rocked by an incomprehensible tragedy, being triggered into not feeling safe is completely understandable – in fact, we should expect it.

I can’t imagine what it was like to sit on Friday afternoon, separated from your children while schools were in lock down and information was patchy. Far away in Auckland I was only one room away from mine. As I listened to the events unfold on the radio, I still kept checking they were okay.

But, unlike the earthquakes – an act of God – now, we have someone to blame. And with blame comes rage, hate and a natural desire for retribution.

This is what trauma at the hands of another human being feels like.

And while the desire to obliterate the person who commits heinous acts is natural, it is also deeply harmful. I’m not talking about the arrest, trial and being held to account that is the measured, civilised response of our society. But instead the visceral desire to inflict pain and suffering on those responsible.

The kind of hate that makes the death penalty something that some – once more – are arguing in favour off. And I get it, I really do – I’ll admit, I’ve had the same thoughts.

While fantasies of vengeance are a natural response to trauma, hate ultimately begets hate. In acting from this place we risk becoming perpetrators ourselves, and in so doing becoming that which we ultimately despise.

What is more helpful is what many Kiwis have already been doing: seeking connection, reaching out, and finding meaning in each others’ arms.

To meet hate with love.

The most powerful antidote to any trauma is each other. The simplicity of each others’ company; to sit, talk and be with people, our community, our loved ones.

Healing from trauma involves connection, and finding meaning. And perhaps there is no better revenge than to allow manaakitanga to bring us together. To allow love to shine through the darkness and to come together, more strongly than ever before, united in our defiance of hate.

The Nutters Club: The Christchurch mosque shootings: the power of kindness

Dr Khalid Shah: ‘I’ve never had such a sense of belonging in NZ’