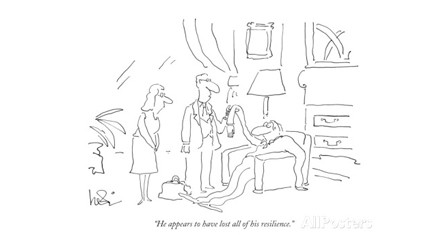 Over the next few weeks Wallace and I are going to be talking about resilience, what is it and how can we all develop more of it.  Much of the resilience research grew out of the known fact that some people respond to stress and trauma better than others and set about finding out what were the factors that meant some people fell apart and some people were able to move on?  (Click here for audio of the interview)

Surprisingly to some the research in the area has also found that resilience is ordinary, not extraordinary.  The psychiatric focus on PTSD and other responses to extreme stress has conditioned us to think of this as normal, but the reality is resilience is more common than previously thought.

“Resilience is the process of adapting well in the face of adversity, trauma, tragedy, threats or significant sources of stress — such as family and relationship problems, serious health problems or workplace and financial stressors. It means “bouncing back” from difficult experiences.”  (Click here for the full article)

The factors most widely accepted as being key to developing resilience have been identified in the research of Steven M. Southwick of Yale Medical School and are:

Not surprisingly, to regular readers of this blog, mindfulness has a big role to play especially when it comes to better regulating emotions and adopting a more positive outlook.  Regular practice of mindfulness meditation has been shown to increase our ability to observe and regulate emotions, and most recently reduce anxiety.

A recent study measured brain activity via brain scans before and after a group of 15 people completed four twenty minute meditation classes.  The scans  found that activity in the area of the brain known to be active in thinking and emotions (anterior cingulate cortex) went up and activity in the area known to be active in worrying (ventromedial prefrontal cortex) went down.  Further more study participants reported an average of a 39{1b812f7ed7a77644fff58caf46676f6948311bf403a3d395b7a7f87010507f87} decrease in their levels of anxiety.  (Click here for the article)

In short, regular practice of mindful meditation seems to inoculate our mind and emotional systems against stress and negative emotions by increasing our ability to tolerate and experience them and decreasing our capacity to get “stuck” on distressing thoughts and feelings.

Think of it as vitamin “C” for the mind.