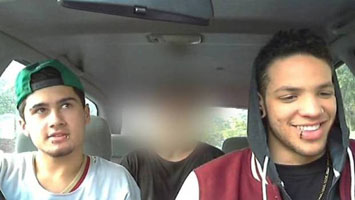 Sorry. Such a small word, but one completely foreign to Roast Busters’ ring leader and aspiring musician, Joseph Parker, it would seem.

To apologise or make amends is hard. Pigheadedness, our pride, or not making ourselves truly vulnerable can and does stand in the way of saying sorry.

But sorry is just a word. A true apology must also involve behavioural change and an attempt to set things right.

The latest performance by this young man, who in my opinion is clearly troubled, was almost the textbook “Public Relations Sorry”. It was a “sorry if I hurt people, but I just want to put it behind me” apology.

And we find out it was an apology that arose after he asked to be flown from LA to Auckland (Newshub has stated the interview was agreed upon if Parker “found his own way to New Zealand”). It was also made in the context of wanting to launch a music career.

It was a media appearance that looks to have been fuelled by his own needs – not out of any genuine desire to set things right.

Offered in his own defence – as evidence of his contrition – were his attempts to contact the young women involved.

We don’t know if they wanted to be contacted by him, but I doubt very much he took the time to find out.

So then, should he be forgiven? Are people allowed to move on with their lives? On what basis do we assess if people have changed?

Ultimately that is up to the people he is alleged to have hurt. But one of the developing outcomes of the larger #MeToo movement – of which the Roast Busters case was in some ways a disturbing prequel to – is the attempt by some men to re-enter public life after accusations of sexual misconduct, and to expect to say sorry, and carry on like nothing has happened.

But unless it’s clear that genuine attempts to change behaviour have happened, and true acceptance of the hurt caused, then no, we shouldn’t just move on.

The kindest thing he could do would be to quietly stay in obscurity because the victims, in this case, have no say over whether he gets thrust into their lives, on prime time TV, or worse, writes a song about them.

Men like this can “move on”. In fact, their apparent lack of empathy makes it possible. But victims of sexual abuse and assault are frequently left with the psychological scars for the rest of their life. The impact is even more severe if it occurs when they’re young.

They certainly don’t get to move on so easily.