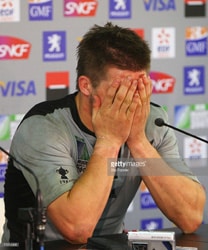 It’s emotion that carves memories into the mind, connecting neurons and creating pathways like tyre tracks on wet sand.  I have few memories of the ’87 World Cup, I was too young, and for reasons I can’t explain ’91 passed me by too.  But the growing realisation, in 1995, that our supermen were losing is burned in my mind, as I sat on the floor of my flat choking back tears and hoping my mates wouldn’t see me cry.

Fast forward to 2007 and I still remember sitting with my head in my hands, genuinely scared I was going to throw up on my carpet, the shot of Dan Carter looking similarly ill, sitting in the grandstand as white as a sheet, burned into my brain by emotion.

And then there’s the worst 20 minutes of my life.  Suspended in the air on temporary seats at Eden Park, watching as we fumbled and muscled our way through the longest quarter of rugby in the history of the game, while 60,000 people wrung their hands, and screamed unintelligible expletives in shear gut wrenching frustration, followed of course by the elation best captured by Israel Dagg and Corey Jayne’s snow angels, as they lay ecstatic in the piles of tinsel on the hallowed turf.

Given what I do for a job, and my obvious passion for the game, many people have asked me how do we “cope” with the Rugby World Cup?  How do we as a nation bear the tension, the possibility of losing, the cliched national mourning that follows the possibility of losing the World Cup.  (I still love that despite only winning it twice, if we don’t with the cup we have “lost” it, like it’s always ours by right to lose.)

What I love about sport is its meaningless.  If the All Blacks win or lose, life carries on.  And it must be painful for those who actually don’t care about the sport to watch the rest of us live and die with the flight of an oval ball, the plight of the nation in the hands of 23 (increasingly) young men.  But for those that it does matter, it’s OK that it does.

Coping, in this country at least, means hiding your tears of pain from your mates.  It means not feeling, not experiencing, being tough and hard.  So much of the dark sides of our obsession with rugby, indeed the dark side of being a man in this country, is reflected in our excessive drinking, our thuggishness, our unfettered aggression that flows from this cultural repression, flows from the masculine effort to suppress emotion and not feel vulnerable.

So don’t “cope.”  Relish the emotion, allow it to matter, and enjoy the ride.  It might only be sport and the cynical among us may condemn rugby, and our love of it to being an “opiate for the masses.”  But it’s a hell of a drug.  So yell at the TV, stand for the national anthem, well up with pride at the Haka, and feel free to cry tears of (hopefully) joy on the 31st of October.

And remember, no matter what happens, we’ll always have the memories.

Kyle MacDonald is a psychotherapist and blogger at www.psychotherapy.org.nz.  He is a regular co-host on the mental health talk show “The Nutter’s Club” and contributor to the Sunday morning show on Radio Live.  He is also the Public Issues spokesperson for the New Zealand Association of Psychotherapists