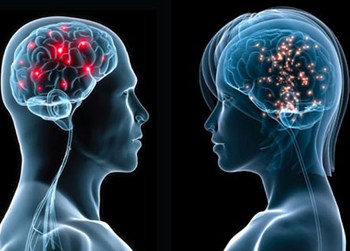 Sex and your brain

I figure people will want to read this blog just because I put the word sex in the title, and that’s the thing about humans, we respond to sex and also can’t help but divide the world into male and female, even though recent research suggests when it comes to our brains there is no such thing as a male or female brain.  Mark Sainsbury and I talked about this on his Radio Live Sunday show this week.  (Click here to listen to the interview)

Anyone who has done any papers in psychology, or even biology, or if you’ve ever read books like “Men are from Mars, Women are from Venus” will know that for a long time people have talked about the fact that not only are men and women different, but that a number of these differences are “hard wired”.  Reading maps is easier for men, women are better at empathy and making sense of emotions, girls struggle with maths and science… we all know the stereotypes.

However a new study has thrown light on the fact that these differences are not hard wired into our brains, and actually we are much more alike than we are different.

“[Daphna Joel at Tel Aviv University] and her colleagues looked for differences in brain scans taken from 1400 people aged between 13 and 85. The team looked for variations in the size of brain regions as well as the connections between them. In total, the group identified 29 brain regions that generally seem to be different sizes in self-identified males and females. These include the hippocampus, which is involved in memory, and the inferior frontal gyrus, which is thought to play a role in risk aversion.

When the group looked at each individual brain scan, however, they found that very few people had all of the brain features they might be expected to have, based on their sex. Across the sample, between 0 and 8 per cent of people had “all-male” or “all-female” brains, depending on the definition. “Most people are in the middle,” says Joel.”  (Click here for the whole article)

So what does this mean? Well all our brains are a mix of skills and abilities, just like us, and labeling certain abilities as either “male” or “female” not only does both genders a dis-service, but is also wrong.

In my view this research is really helpful, because the shadow side of hard wired differences, is sexism and people do use these cliched differences to debase one gender based on a perceived inferiority, and excuse it as “biology” or hard wired, unchangeable, differences.

Ultimately if these differences are not hard wired, then it makes clear that our societies expectations and our own assumptions  are ultimately the cause of any differences in abilities we may see between people based on their gender.

We are all different, but ultimately when it comes to men and women, at least our brains are more alike than we previously thought.

No White Ribbon for John Key