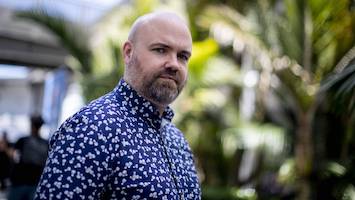 Sunday Star Times: A poverty agitator, a climate negotiator, and a psychotherapist take on doomed mission for the Greens

This article was published in the Sunday Star Times on March the 8th. Click here for the original article…

Ricardo Menéndez March was a nobody when his face began appearing on roadside billboards.

A migrant from Tijuana, Mexico — which explains the conspicuous American accent — with no political track record, he had spent a decade in Auckland working as a film projectionist before digitisation made him redundant. He moved into hospitality, and then migrant advocacy.

That was the entry into a doomed-to-fail Green Party electorate campaign for the Mount Roskill seat in 2017. He claimed 1200 votes.

But this election year is different for Menéndez March.

“I do probably get more media coverage than most backbencher MPs,” he says.

History tells us that nearly every single Green Party campaign for an electorate seat is hopeless. The party’s co-founder Jeanette Fitzsimons, who passed away this week, is the only one to have succeeded, and that was in Coromandel in 1999.

Green candidates instead raise their hands to put their party on the map, and pitch for a high enough placing in the party’s list to make it into Parliament. And this election year presents an opportunity for many.

The party is down five high-ranking members since the 2017 election, and with a potential gender imbalance in the party’s top 10 spots — six are women — the equity-conscious party may look to promote men.

Hundreds of South Auckland locals queue from the early hours of the morning for assistance from the Manurewa office of Work and Income.

He has a profile — now — and his activism credentials have been bolstered since taking up a job as co-ordinator for Auckland Action Against Poverty (AAAP) after the 2017 election.

Always ready to hammer the Labour-led Government, he has been beamed onto breakfast television, broadcast on drive-time radio, and quoted in newspapers countless times — on average once a week, he estimates.

Throughout, the message has been consistent. The Government is failing the poor, benefits are too low, and housing too expensive. And he’s gained some traction. Take the furore over queues at Manurewa’s Work and Income office, for example.

In July, RNZ arrived on a Thursday to find people queueing from as early as 2am to receive emergency grants — with the help of AAAP’s advocates. A week later, Breakfast‘s John Campbell was broadcasting live from the queue and asking questions of Social Development Minister Carmel Sepuloni, who fronted up.

Some Green insiders rate his prospects, but a media profile doesn’t always make a Green MP.

“I’m running to basically make sure that these issues go into the negotiating table,” Menéndez March says, “… I would not want to be standing next to the minister pretending that they’re doing enough.”

He says his work has the potential to bring out low-income Māori and Pasifika voters in the Maungakiekie electorate where AAAP is based, who would traditionally steer clear of the Greens.

“There’s a real opportunity to sort of tap into bread and butter issues that these communities care about.”

The inner-Auckland electorate, reaching from Ellerslie to the edge of Manukau, has traditionally been a bellwether seat, meaning it has switched between Labour and National along with the Government.

National Party MP Denise Lee was the circuit breaker, claiming the seat with 15,000 votes in the 2017 election in a year that Labour won. Lee says she is readying to campaign for the “real awesome Kiwi battlers who live here”.

“People here on the ground want to see someone active for the whole term and, you know, they don’t want a Johnny-come-lately.”

Labour MP Priyanca Radhakrishnan, who was 2100 votes shy of Lee in the 2017 election, hoped to be nominated by Labour to contest the seat.

Green MP Chlöe Swarbrick, this year contesting Auckland Central, ran in the Maungakiekie electorate in 2017, fresh off the back of an Auckland mayoralty campaign. She received 4000 votes, twice the party vote the Greens gained in the electorate. She could have cost Radhakrishnan the seat.

Menéndez March isn’t promising to topple Lee. He is practiced in the party line, which amounts to “vote tactically”.

“I’m always very clear that if people want to see somebody like myself advocating for decisions in Parliament, they’re going to have to party vote Green,” he says.

But he first needs to impress Green supporters, and he feels positive about his chances.

“I am asking the Green Party membership to consider putting a grassroots advocate, who understands issues of inequality in the top 10, so that we can actually do these issues.”

As a broad generalisation, the Greens are divided into two camps. There’s the environmentalists focused on climate change, and those focused on social justice and inequality. (This is contested by Green members, who say any divide is overstated.)

The current cohort of Green MPs, those next in line for senior positions if they eventuate, have a strong showing on the social justice and inequality side — Jan Logie, Swarbrick, and Golriz Ghahraman​.

There’s also excitement off the back of the school climate strikes in 2019, a feeling that urgency surrounding the existential crisis — particularly for New Zealand’s Pacific neighbours — is informing mainstream politics.

All roads lead to climate action for the Greens. MPs and candidates are pitching issues such as income inequality and a mental health crisis with a climate lens.

Many say Teanau Tuiono​ is a front runner. (“Well that’s nice,” he says on hearing this.) Tuiono is well connected in the Greens, and has a two decade long resume that fits.

He is an experienced climate change negotiator, living for two years in Paris to work for the United Nations on the issue, along with indigenous rights and biological diversity.

Most recently, he’s interviewed the grieving mothers of sons executed by death squads in the Philippines, as part of a UN investigation into human rights abuses.

“The stories I won’t ever forget. Some of the images they showed us, kids telling us about their parents and teachers being killed.”

Back home in Palmerston North, where he’s lived with his wife and four daughters since 2007, he’s been front and centre of two locally prominent campaigns.

The first, for a local government Māori ward, didn’t succeed. The second, to shut down a defence industry expo, was a claimed success after the forum did not go ahead last year.

“I would’ve liked to have won, to be honest … There were six candidates and I think they had far more money than I did.”

Tuiono “fills a lot of gaps” for the party: he’s a provincial voice in a party of urbanites, and a te reo Māori speaker.

“We are the party that goes on about climate change … it’s really important to have voices from the front line of climate change and the Pacific Islands are at the forefront.

“And it just so happens I’m a Pacific Islander.”

In 2017, Tuiono ran for the Greens in the electorate he grew up in, Manurewa. He gained 880 votes, but he doesn’t rate it as a rough campaign in comparison to how the Greens fared in general.

It was a shocker, with co-leader Metiria Turei under huge pressure for a political gamble, making a platform out of admitting she once lied to claim more moneyon the benefit. She resigned as the political controversy caused the Green’s polling to plummet.

​Tuiono was number 16 on the party list, well short of the eight MPs who eventually made it into Parliament. He might be poised for a high list placing this year, but again he stands almost no chance in winning an electorate.

Tuiono makes light of his chances, pledging optimism: “They say a week is a long time in politics. I would probably need quite a significant week.

“Our best bet is to just get people to vote, that’s the one thing.”

Back in Auckland, north of Maungakiekie in the Epsom electorate, candidate Kyle MacDonald is seeing more solar panels on the rooves of the electorate’s million-dollar homes. That’s a sign that Epsom voters are increasingly Green, he says.

Epsom is famed for being an ACT Party fiefdom, and MacDonald, a psychotherapist and broadcaster, gives a frank appraisal of his chances this election: “You know the party line right? The Green Party is campaigning for the party vote, so let’s make that really clear.”

MacDonald is a family man with two daughters, and has lived in the electorate for five years. His background is not that of a traditional Green candidate. He’s been a psychotherapist for two decades, helping people with mental health issues and addiction through their troubles with talk therapy.

From here, he’s become an advocate for his cause. MacDonald gained a spot on radio’s ‘Nutter’s Club’ show, which has him talking to callers on-air about their problems.

The show, started by comedian-turned-advocate Mike King, has a strong following of dedicated listeners. Between 60,000 and 80,000 tune in, which is the largest radio audience for the 11pm to 1am weekend timeslot, MacDonald says.

MacDonald also wrote a regular column about mental health and drugs, which ended three weeks ago when he announced his candidacy.

The incumbent, ACT leader David Seymour, has been a target of that column. In 2018, he wrote that Seymour had sent a letter to constituents “encouraging protesting” over a Housing New Zealand plan to expand housing in Epsom.

Seymour, in the letter, said there was a chance the people in the housing would have social and mental  health issues requiring special support. MacDonald complained to the Human Rights Commission saying it encouraged discrimination. The commission decided not to pursue it.

Seymour has a stranglehold on the electorate. His libertarian party traditionally does a deal with National, which promises ACT a clear run at the seat for support in Government.

National has signalled the same deal stands for this election. In 2017, the arrangement helped Seymour claim 16,000 votes, a 6000 vote margin from his nearest competitor, yet fewer than 700 party votes. So, Epsom voters do understand strategic voting.

Seymour says his opponent “jumped of the deep end” with the attempted complaint and must not understand Epsom’s street-level issues.

“My advice is knock on the doors and know the local issues and local people before launching into any kind of public attacks.”

The idea that Epsom voters might vote for an ACT local MP and for the Green Party isn’t a surprise, Seymour says, there’s always some that do.

“I’m the MP that gets around Newmarket on a e-bike.”

MacDonald is happy to take the very-popular Seymour head on, and push for his party’s vote. He sees getting into Parliament as an extension of the advocacy work he already does.

“I wouldn’t be running if I didn’t think there was an opportunity there, but ultimately it comes down to the [Green Party] members to make a decision.”

The members, and the voters.

Almost every Green votes on where candidates rank on the list, a lengthy process that won’t be settled for months. An announcement could be expected in early June.

Then it’s for the voters to decide who appeals. The Greens have not been polling at zenith levels — coming in at around 5 and 8 per cent in recent months. But there’s still six months until the 2020 election.

The Nutters Club: Counselling: The good and the bad