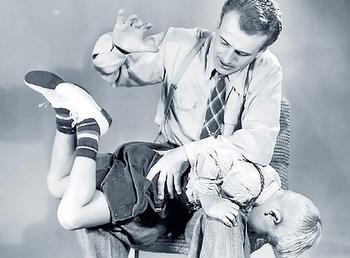 So this week the so called “smacking debate” hit the media again, thanks to the reports that Mr. Colin Craig, aspiring politician and leader of the as yet unelected “Conservative Party” smacks his daughter.  Blogs were written, and moral outrage has been expressed via comments posts all up and down the country as people peruse the moral argument and passionately defend what they “believe”.

But beliefs aside, what does the current science have to say about the effectiveness of physical punishment of children as a parenting tool?  Does it work?  Wallace and I talked about this on his Sunday morning show on Radio Live.  (Click here for audio of the interview)

As you can imagine, advocates of smacking as a legitimate parenting intervention point out that the research cannot prove a causal link.  That is of course true, it would be unethical to randomly assign children to a “smacking” and “not smacking” group to test the differences.  But tobacco companies made the same argument, and despite that we all now accept that smoking kills people.  Why?

When we look at health research like this we are looking at correlations, and the more studies that keep coming to the same conclusion, the stronger the result.  And the literature on the effects on smacking is both large and consistent, in fact “the research on the effects of corporal punishment achieves a degree of consistency that is rare in social science”  (Click here for the whole article) and “up to 93{1b812f7ed7a77644fff58caf46676f6948311bf403a3d395b7a7f87010507f87} of studies now agree” (Click here for the source or see video below)

It’s also important to be clear that the body of research only  looks at what people largely consider “smacking”, that is a hit to the bottom or legs with an open hand, and excludes what most consider violence or abuse.

So, does smacking work?  Not according to a whole raft of studies, and the results are clear and consistent enough that even the American Psychological Association, or APA, have issued a clear statement against smacking.  (Click here for the article).

However all this comes at a high potential cost.

The problem is smacking tends to decrease long term compliance, that is kids behave less compliantly over time than kids who aren’t smacked, and it also tends to increase their aggressive behavior more generally, and specifically towards other children.  In short, smacking makes kids worse behaved over time, and more likely to see physical violence and aggression as a way to solve their own interpersonal problems.

So are their any adverse long term effects of so called “minor” smacking”?

Again the research is clear that a history of smacking has been associated with (see this article and this article):

Quite a risk for some short term compliance.  And again, it’s important to note this is not for severe or abusive assault: these effects increase with even minor smacking:

“The study concluded that even low and common levels of spanking were associated with increases in antisocial behaviour. Unlike studies using other statistical methods, this study suggests that the effect of punishment on behaviour is not linear, and challenges the assumption that only frequent and severe punishment is associated with harmful effects.” (Click here for the whole article)

So what to say to those of you out there thinking “my parents smacked me, and it didn’t do me any harm!”  Well, I would say two things.

Firstly you don’t know it didn’t.  Smacking is associated with all sorts of negative emotional effects, including depression, anxiety and substance abuse.  And those most likely to smack their own children, are those who were smacked.  This is a “negative effect” all on it’s own.

Secondly, you may be right (sort of).  Any so called “adverse event” in development has to balanced against all the other resilience factors in a persons upbringing.  If the occasional smack was the only adverse event in someone lives, they’re probably doing OK, despite but not because of being smacked.

The bottom line is this: “There is no safe threshold on the number of times or how hard you can smack your child” (Click here for whole article)