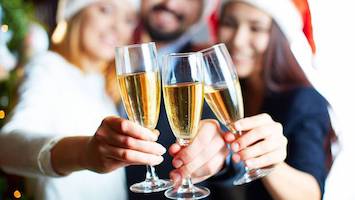 The danger of alcohol at Christmas

‘Tis the season, to eat drink and be merry. Yet at the same time as we are having a (largely) reasoned debate about the legalisation and regulation of cannabis – we are actively encouraged to drink alcohol, and even more so at this time of year.

Under the new “Cannabis Legalisation and Control Bill” cannabis will be strictly regulated. No advertising, no large signs outside shops, no branding on packaging. No sponsorship or endorsements. And, perhaps most importantly strict and severe penalties for anyone who supplies to anyone under the age of 20 – the proposed legal age for the purchase of cannabis.

Yet alcohol – a drug that health research is clear is significantly worse than cannabis – can be promoted via advertising, and the sponsorship of high profile sporting and entertainment events.

All of which can make the whole debate around cannabis legalisation and the moral panic that ensues from some, seem deeply frustrating – not to mention hypocritical. Because those opposed to legalisation of cannabis likely drink alcohol. And would likely object to the same degree of regulation being applied to their favourite tipple.

Of course, alcohol policy change is a hard sell. We Kiwi’s love our booze. But from a health point of view it’s a no brainer. For every one person who has landed on my couch to get help for their cannabis use, I would’ve see hundreds with concerns about their alcohol use. Ask an Emergency Department doctor which drug causes the biggest problems, and without fail they’ll tell you alcohol.

Moreover if you want to find the cheapest alcohol in town, go to the liquor stores in the poorest parts of town – and it won’t be hard to find one, because generally the highest concentrations of standalone off licences are in the lowest socioeconomic areas.

And at this time of year, for those it struggle with their drinking, it can be hell. Work Christmas parties, champagne on Christmas morning, New Year’s eve. And with the endless advertising and sponsorship, it can feel like alcohol is inescapable.

I would love to think that one of the outcomes of seeing how effective strict regulation of a drug like cannabis can be, is that we wake up to a different conversation about alcohol. Not one that seeks to ban or demonise, but simply tries to limit some of the damage..

How? Less retail outlets, price controls on the cheapest and nastiest products, ban any products that can be seen to target young people, revisit the drinking age and ban advertising.

And do we really want our top sportspeople associated with alcohol? Should the All Blacks really be sponsored by a brewery?

If the “Cannabis Legalisation and Control Bill” passes at next year’s referendum, then we will know that as a country we are able to embrace a reasonable, health-based approach to one of New Zealand’s favourite drugs. Here’s hoping it also means we’re ready to apply the same standard of thinking to alcohol.

The Nutters Club: Keeping your mental health balance through Christmas