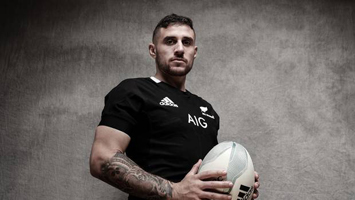 The era of woke All Blacks is upon us

This is what societal, attitudinal change looks like, writes Kyle MacDonald.

Next week our nation begins it’s four-yearly ritual of complete obsession with the beautiful game. Coincidentally, this time around, the Rugby World Cup also kicks off in the same week we mark Mental Health Awareness here in New Zealand.

Love it or hate it, the very nature of rugby in New Zealand means it’s linked with almost all aspects of our history, and culture. From race relations to our nuclear free stance, our bi-cultural relationship, gender equality and the women’s game, rugby often acts as a cultural barometer in this country.

Thanks to the sterling work of Sir John Kirwan, the relationship between mental health and rugby is well established. But increasingly we are seeing modern players take up that mantle in a new and deeply encouraging way.

Take the NZRU’s ” Headfirst ” campaign for example. Before the Tonga test match, the crowd was encouraged to take a “moment against silence” and make lots of noise, to raise awareness around the number of men we lose to suicide, who don’t reach out for help and remain silent.

Even raising this at a game would’ve been unthinkable just a few years ago. This is what societal, attitudinal change looks like.

There is now also a new generation of young men who not only play the game with a skill, heart and passion that beggars belief, they are genuinely showing what positive change for men looks like.

This week, in an interview with Jennifer Dann TJ Perenara (of the rainbow boot laces and Ihumātao wristband fame) revealed the All Blacks have formed a “vulnerability group”. Established by Sonny Bill Williams and Ardie Savea, the group simply aims to give players a safe space to talk about what is going on in their lives, in their heads, good, bad or otherwise.

This is the All Blacks, remember. Talking about the value of vulnerability.

We’re always elevated the mythical “tough as nails” All Black. Sir Colin Meads, Wayne Shelford. Hard men: uncompromising. But with all due respect to the men, “vulnerable” is not a word you’d associate with Pinetree, or Buck.

I for one, though, am glad things are changing. These are young men, looked up to by so many. But they’re also young men under a tremendous amount of pressure. The weight of the nation upon them, with any loss grieved like a national tragedy.

Anything they can do to look after themselves, not just their bodies, but their minds and their emotional lives – has to be a good thing.

But perhaps it’s also time to update the stereotype. The time of the woke All Black is upon us. And I couldn’t be happier.

The Cafe: Vote Kyle for the Auckland DHB

The Nutters Club: Halle Tupuivao: From homelessness to helping transform my community