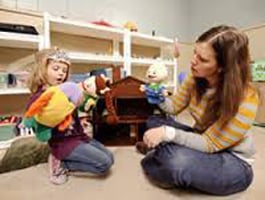 The Language of Play

So often these days we focus on being productive, that it’s easy to forget that we all started our learning through play. A recent article in the New York Times raised concerns about how many to case on meeting increased focus on structured learning at the cost of unstructured play, and sadly we see the same trend occurring in New Zealand is it a childhood education.

It’s a topic I’ve talked about before (see: Playtime and Mucking about) because play is how children learn, and it’s also a “language” that can be used to help children via play therapy. Mark and I talked about this on his Sunday morning show on Radio Live this week.  (Click here to listen to the interview)

From a certain point of view of course it can seem to make sense that to learn more you should start structured teaching earlier.  Surely that would help, right?

“A 2009 study by Sebastian P. Suggate, an education researcher at Alanus University in Germany, looked at about 400,000 15-year-olds in more than 50 countries and found that early school entry provided no advantage. Another study by Dr. Suggate, published in 2012, looked at a group of 83 students over several years and found that those who started at age 5 had lower reading comprehension than those who began learning later.”  (Click here for the article)

And play isn’t just about learning in the traditional sense, it’s also about learning social skills, physical dexterity, and emotional regulation. And this is how play therapy can be so useful.

““Play is often perceived as immature behavior that doesn’t achieve anything,” says David Whitebread, a psychologist at Cambridge University who has studied the topic for decades. “But it’s essential to their development. They need to learn to persevere, to control attention, to control emotions. Kids learn these things through playing.”  (Click here for the article)

The origins of play therapy go back to Anna Freud in Vienna and Melanie Klein in Berlin in the first half of the 20th century. Both women used play therapy as a means to understanding and healing what they believed to be a complex time during which children understood pain and suffering.

Klein saw the child’s play in therapy as similar to an adult’s free associations and therefore a window into even very young children’s unconscious, particularly surrounding experiences of abandonment, envy, and rage.

Since Klein’s time a host of research has shown play therapy is effective for children as young as 2-years-old up to their teens.

“After play therapy, the average treated child was functioning at 0.80 standard deviations better than children not treated… …The obvious implication of this research for practitioners is that play therapy demonstrates itself to be an effective intervention for children’s problems, one that is uniquely responsive to children’s developmental needs. Of significant note, play therapy has a large effect on children’s behavior, social adjustment, and personality.” (Click here for the whole article)

Play therapy can help children work through emotional, psychosocial, developmental, family and behavioural difficulties without them becoming frustrated at their lack of words or, for younger children, without them having to confront the issues head on.

The sessions are held in a therapeutic playroom with toys, which the child themselves will select to play with. The play therapist then enters the child’s play world and joins in at the child’s direction and follows the choices which the child makes.  Aspects of play therapy might include: role-playing, storytelling, clay modelling, puppets, masks, sand trays, drawing, music and dance.

So if you’re worried about your child and feel they may benefit from play therapy, feel reassured it’s a great treatment approach.  If you’re in Auckland and are looking for someone I suggest you talk to my colleagues at the Robert Street Clinic or elsewhere in New Zealand check out the Psychotheapists Board members list, and look for people who specialise in children and adolescents.