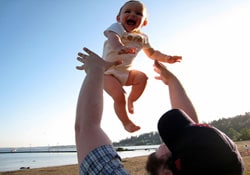 The stereotypical image of the father throwing a young infant in the air while mum anxiously looks on, is one that all parents are familiar with. Recent research has suggested that this type of vigorous play that typically fathers engage in is not only good for children but may in fact be necessary for their development. Mark Sainsbury and I talked about this research on his Sunday morning show on Radio Live this week.  (Click here to listen to the interview)

Parenting research is generally focused on the importance of the attachment bond between mother and infant. But when using these models to try and understand the bond between a father and child they often don’t adequately describe the quality of the relationship…

“When Kathryn Kerns asked 30 teens and preteens to come to her laboratory and talk about their parents, many of their dads scored low on a standard yardstick her research team was using to evaluate the parent-child bond.

The children described rich, warm relationships with their fathers, however, says Dr. Kerns, a professor of psychological sciences at Kent State University in Ohio. They said things like, “My dad gives me encouragement to do things,” or, “My dad tells me he thinks I can do well.’ ” (Click here for the whole article)

It’s also true that psychotherapists understand that ‘maternal’ and ‘paternal’ doesn’t necessarily mean a female mother and a male father.  One of the interesting aspects of this recent research is that in male same sex parent relationships the man who takes on the more ‘maternal’ role shows biological changes in parts of the brain (mainly the amygdala) that are identical to the changes that mothers undergo when parenting.  Although the study doesn’t explore it, I have no doubt the same is true, albeit in reverse, for females parenting in same sex relationships.

However all of this exciting rough and tumble play is not just about engaging with the outside world, researchers in the above study came up with a way to measure the quality of the relationship between fathers and young infants in a test they called “The Laughing Task”…

“In this procedure, researchers leave parent and child alone in a lab without toys for two or more minutes and ask the parent to make the child laugh.  “A landmark of optimal fatherhood” may be the ability to maintain sensitivity and emotional rapport during rambunctious play… …Other fathers scared or unnerved their children by using monster voices. Fathers who aren’t sensitive during play can disrupt a child’s ability to form attachments, fostering insecurity and fear.” (Click here for the whole article)

So while this information about the importance and value of young children’s relationship with their fathers may for some be politically and economically uncomfortable, we know from countries where more paternity leave has been offered to fathers that more engaged and attuned fathers leads to a range of positive health outcomes for the infant, the father and the mother…

“There is growing evidence that employment-based family support measures such as maternity and paternity leave after childbirth and parental leave to care for children in the early years has the potential for improving children’s health.  More research is emerging on the benefits of fathers taking parental leave, particularly in the Nordic countries – including boosts in fathers’ involvement in care of infants, cognitive outcomes for children, improvements in the quality of couple relationships and even fertility gains.”  (Click here for the whole article)

Of course this are of research can be used by some to further all sorts of arguments for traditional families, and even by some against same sex parenting.  However this particular study shows clearly, children need a range of different relationships with adults: regardless of gender.

And in light of the recent landmark Supreme Court decision legalizing gay marriage in the USA, it’s important to underline that there are no differences between children raised by heterosexual and same sex parents…

“The new research, which looked at 19,000 studies and articles related to same-sex parenting from 1977 to 2013, was released last week, and comes as the U.S. Supreme Court is set to rule by the end of this month on whether same-sex marriage is legal.
“Consensus is overwhelming in terms of there being no difference in children who are raised by same-sex or different- sex parents,” University of Oregon sociology professor Ryan Light said on Tuesday.” (Click here for the whole article)