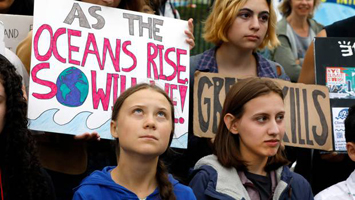 The link between Greta Thunberg and misogyny

How people react to Greta Thunberg says much about their misogynistic tendencies, writes Kyle MacDonald.

Bad things happen when we don’t listen to children. It wasn’t that long ago we sent them up chimneys, and worked them to death in work houses. In some parts of the world they still do.

Much of my working life I’ve sat and listened to people explore and understand the impact that various experiences in their childhood had on them. Of not being listened to, of being treated with disdain, told to get over it, to stop crying. Experiences of being beaten, abused and neglected.

And of not having a voice, simply because they were small.

We have a terrible record in New Zealand when it comes to the wellbeing of children. It wasn’t that long ago it was still legal to assault children in ways you would never forgive if the victim was a fully grown adult. Why it should be legal to hit someone smaller, vulnerable and less powerful than you has always been beyond me, but some will still claim it is their God-given right to do so.

Because some prefer children have no rights, no voice and no power.

Authority over women and children is of course one of the corner stones of much that is wrong with traditional, right wing, conservative orthodoxy. That somehow adult men are the only ones truly allowed a voice. That children should be seen and not heard.

Ultimately this is the political extremism that enables and justifies abuse. The thinking that allows for violence against children, that turns a blind eye to the subjugation of women, that questions “what was she wearing?” when a woman reports sexual violence.

And it’s the same thinking that denies we are killing our planet.

Turns out, people’s responses to Greta Thunberg provide a pretty clear litmus test of how much one still clings to the orthodoxy of misogyny.

Because she is both young, and a woman. She also – thankfully – refuses to be silenced.

So she stands defiant, and seems to show little regard for the vitriolic rants that tell her to sit down and shut up. Instead, she carries on. She tells world leaders they’re not doing enough (because they’re not) and that it’s not up to her to be the beacon of hope: it’s up to them.

Not attack them, and leave them to flounder in their own distress. But so much of what unconsciously drives mysogyny, patriarchy and abuses of power over the vulnerable is an inability in the attacker to feel vulnerable.

Instead that fear and inability to tolerate vulnerability is projected out, and attacked in others: children of course being the very personification of vulnerability.

So if you feel affronted by Greta Thurnberg’s words, good. Deal with it. In her words:

But don’t take your feelings out on her, use them instead to take action.