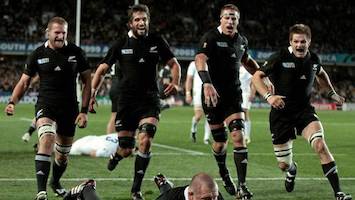 The most awful game of rugby ever

Since watching a particularly awful game of rugby, Kyle MacDonald has pondered how we react to loss and are led by our national team.

Eight years ago the mental wellbeing of our nation hung on a rugby game. Or at least so we were told. I remember it very clearly: The night of October 23, 2011, I was sitting hundreds of feet in the air on temporary seating made of scaffold – and with 15 minutes to go – watching 60,000 people teeter on the edge of a collective nervous breakdown.

It was, without question, one of the most awful games of rugby I’ve ever watched. And since it I’ve pondered if things would’ve been different if we’d lost.

This collective neurosis we all seem so enthralled by since the despair of 2007, was it all just clever marketing hype? Did winning at all costs matter that much to us?

In 2011, of course, we were told how the All Blacks used “mental skills” trainers to overcome pressure, and how the culture had changed away from heavy drinking and the hierarchical, at times bullying, team traditions.

The changes were seen as inevitable in the professional era. But it was more than that. It was a culture change, even a generational change.

And now, eight short years later, the All Blacks use words like “vulnerability”. In the last weeks we’ve seen All Black hooker Dane Coles unashamedly cry at a press conference, subsequent to the loss to England. Steve Hansen too was visibly emotional the end of the tournament as he spoke about the “privilege” it has been to coach the team for so long.

And yes, we lost, and yet the sun still came up. But more importantly we lost, and were allowed to talk openly about how we felt.

In an interview before the finals, Kieran Read shared his desire as captain to break down the old school mentality, and yes be more open, vulnerable and inclusive:

“Consciously, in recent times I have come to realise this generation are potentially more emotionally charged and fluctuate more than perhaps me and guys older than me because you never really had those opportunities to be that way when you were growing up.”

Read, along with senior players such as Sonny-Bill Williams, TJ Perenara and Ardie Savea, have embraced the change because it has made them better players and – dare I say – better husbands, fathers and men.

As I get older, it can be so easy to forget how young so many of our sporting super stars are. They are inevitably of a different generation.

But perhaps we should all take our lead from the now ex-All Black captain. Rather than deriding “millennials” or “Gen Zs”, realise instead we can learn something when we take the time to listen.

In losing the All Blacks showed a whole new generation of young men how to not be ashamed of feelings, how to lose gracefully, and how pick your self up and keep going in the face of adversity.

Even without the Webb Ellis Trophy, these young men are champions in my book.

The psychology of boomer-millennial warfare