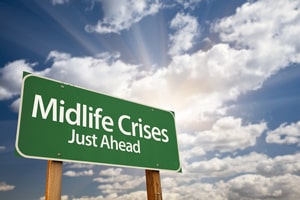 The Myth of the Midlife Crisis

The idea of men (and it is usually men in the myth) on the brink of forty leaving their wife, changing careers, marrying a younger woman and starting a new family is well embedded in our popular culture: but is it real?  Is there such a thing as a mid-life crisis?  Mark Sainsbury and I talked about this on his Radio Live Sunday morning show this week.  (Click here to listen to the interview)

The midlife crisis, as a construct, was born in 1965 thanks to a psychoanalyst called Elliot Jacques and popularized by Daniel Levinson in his book “The Seasons of a Man’s Life”.  The central ideas is that each life stage requires people to overcome and meet certain challenges, and this can result in a crisis.  Critics of Levinson’s research point out that he interviewed a small sample of people (around only 40 professional men) and from this formed his central theory.  However the idea took hold in popular culture, in part at least because everyone knows someone who appears to have had a mid life crisis, and in part I believe because it is simple way to think about a complex issue.

“According to a continuing national study of midlife funded by the National Institute on Aging, 26{1b812f7ed7a77644fff58caf46676f6948311bf403a3d395b7a7f87010507f87} of adults ages 25 to 75 report having had a midlife crisis. Among respondents who are 50-plus, slightly more, 35{1b812f7ed7a77644fff58caf46676f6948311bf403a3d395b7a7f87010507f87}, say they’ve had one.  But in the group that includes 30- and 40-somethings, only about half who reported having a midlife crisis said it was triggered by “inner turmoil and angst associated with getting older,” says Margie Lachman, a professor of psychology at Brandeis University and a researcher on the study. The rest of the crises, she says, were linked to problems that aren’t unique to midlife, including job loss and divorce… …Moreover, about the same proportion of study participants say they experienced crises at other points in their lives.”  (Click here for the rest of the article)

So there is at best very weak evidence for a crisis that is directly triggered by simply entering the phase of life called “middle age.”  And add to this that the life satisfaction literature tends to say that for many happiness increases at the time we turn forty, and continues to grow across the rest of the lifespan…

“…life satisfaction increases significantly from the 40s to the 50s—and again from the 50s to the 60s—as children and careers mature and salaries reach peak levels. While midlife is often a time of stress, Prof. Wethington says, those between the ages of 40 and 60 also “have the resources and experience to manage more daily stress than younger people do.” Midlifers, she adds, are “champion copers.”  (Click here for the rest of the article)

So is there such a thing as a midlife crisis?  No, but that doesn’t mean there aren’t unique and specific challenges associated with this phase of life.  It also doesn’t mean you can’t get depressed, re-evaluate your life, or otherwise struggle for a plethora of reasons in the middle phase of life.  Just that it ain’t the number on your birthday cake that is the problem.

So if you’re creeping up on your forties, rest assured, turning forty in and of itself isn’t going to cause a crisis.  In fact, make the most of it because it’s likely things will in fact only get better from here.