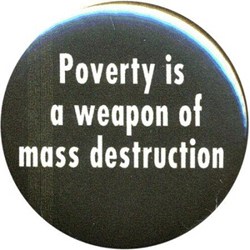 This week, when asked to comment on why mothers who have had multiple children uplifted by CYFS keep having more children, the Minister for Social Development Anne Tolley replied flippantly “I think they like having sex.”

I asked Tolley why SHE thinks women who’ve had multiple children removed keep having babies. Her response: “I think they like having sex”.

As shocking as this is, it’s not surprising.  This National led Government have consistently played the “blame the poor for being poor” card since coming into power.  Furthermore their policies tat have focused on “accountability” and getting people back to work with the threat of punitive sanctions, clearly echoes this mentality.  In fact I’ve even written about it a couple of times, see: “Beneficiary Bashing” and “The psychological effects of poverty“.

But putting rhetoric and ideology aside for one moment, what are the reasons that some people who live below the poverty line struggle with self control?  Is it even true that they do?  What does psychology and the other social sciences have to say that can help us better understand, rather than blame?  Lloyd Burr (sitting in for Mark Sainsbury) and I talked about this on the Radio Live Sunday morning show this week.  (Click here to listen to the interview)

The most important thing that all the studies show is that there are some clear impacts of living in poverty, but any effects are caused by the situation and stresses of living below the poverty line: they are not inherent character flaws that lead people to poverty…

“The very definition of self-control is choosing behaviors that favor long-term outcomes over short-term rewards, but poverty can force people to live in a permanent now. Worrying about tomorrow can be a luxury if you don’t know how you’ll survive today.”  (Click here to read the whole article)

In fact there are a number of research results that clarify the effects of living in situations of scarcity on people, and they can be summarized as follows… (adapted from this article):

And yes, there are exceptions, people who are impacted less by these effects than others.  But the undeniable point is many of the stereotypes about those living in poverty are the outcome of their circumstances.

But that idea, despite it’s undeniable truth, is far too politically uncomfortable.  Because if it is the circumstances that cause may of the struggles of poverty then we really should do something to help.  But then our Minister would actually have to do her job.

I guess she just likes being ignorant.