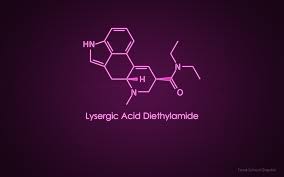 In just the last month, the first therpeutic drug study of LSD or “lysergic acid diethylamide” since the seventies was completed.  LSD, MDMA (ecstacy) and psilocybin (magic mushrooms) all have powerful effects on the human brain, show little risk for dependence or addiction, and when chemically pure have very few adverse physical effects.  This week Wallace and I talked about the this study and the psychiatric use of these chemicals.  (Click here for audio of the interview)

However, there are some risks, mostly around the potential for psychosis in small number of people, and the risk of accidents while under the effect of the drug.

LSD and ecstasy were both discovered largely accidentally, in the earlier part of the 2oth century and had many studies carried out on their effectiveness in therapeutic settings until the western world, led largely by the USA banned them, and placed them in a category that is reserved for drugs that have “no currently accepted medical use“.  This has meant that it is illegal to even study them therapeutically.  Psilocybin is found in mushrooms and like a number of plant based hallucinogenic chemicals, has a history in traditional healing rites, like those used by shaman in Africa and throughout North America.

Put aside any judgements you might have, all these studies were carried out in controlled, supported environments where people were helped to talk about and express their experience.  Pretty much a four to eight hour therapy session.

In the recent study of LSD it was trialled on: “…12 people with life-threatening diseases (mainly terminal cancer). “The study was a success in the sense that we did not have any noteworthy adverse effects,” Gasser says. “All participants reported a personal benefit from the treatment, and the effects were stable over time.”  (Click here for the whole article)

The studies are small, with psilocybin also showing similar positive effects on death and illness related anxiety in particular and MDMA extremely helpful with past traumatic experiences.  Pre-1970 studies showed MDMA to be an effective adjunct to couples therapy, and LSD was promising in the treatment of alcoholism.

Theories abound of course about why they were mis-clasified, but putting aside all questions about their recreational use, it is becoming absurd to block research that may allow people to have a handful of sessions of (perhaps unhelpfully) dubbed “psychadelic therapy“, and get better results than spending years on legal, trademarked and patented synthetic chemicals.  Or maybe that’s the point…

The Problem with Gambling