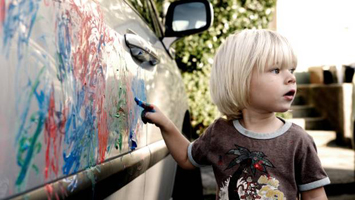 There’s no such thing as a naughty child

Donald Winnicott, one of the pre-eminent psychotherapists of the twentieth century – and in having a parenting programme on BBC radio was probably also the first “media therapist” – famously said: “There is no such thing as a baby, there is a baby and someone.”

Often misquoted as just the first half of that statement, it conveys the idea that psychologically babies don’t exist without a caregiver. In those early days there is only the child-parent pairing, and that is how it should be.

It’s also true to say there is no such thing as a “naughty child”. There is a distressed child and a family.

Children act out their distress and are, as Winnicott would undoubtedly agree, products of the environment they find themselves in. They soak in the emotional environment of the family and react to that in ways that sometimes can seem surprising.

Don’t get me wrong, this is not some wrongheaded way of dismissing destructive, dangerous or hurtful behaviours, but we need to see that behaviour for what it is. Not a sign of an inherently “naughty” or BAD child, but expressions of distress that need to be understood, more often than not from a child that needs help.

This is also not an effort to blame parents. Life is distressing: we endure death and loss, workplace stress, financial troubles, normal parental conflict – all of these can impact children, and no one would say this is “abuse” or bad parenting.

It’s just life. But adults have skills children don’t possess when it comes to regulating these normal stresses. It’s our job as parents to see acting out – as it’s called – for what it is: an expression of feelings that haven’t, or can’t, be put into words.

Increasingly teachers get this, as do parents. Lots of positive messages around the harm of physical discipline, the need for parents to regulate their own emotions to calm their children, and the value of “time in” rather than “time out” sees this message increasingly getting through in ways that are really helpful.

But what I wonder is, why is it at some nominal point that we stop seeing children as influenced, and even harmed by their environments, and decide that as an adult they just need to be responsible, or we’ll lock them up, and in some cases throw away the key?

If we accept there is no such thing as a naughty child, why do we still cling to the idea of a bad adult?

Why don’t we say: “There is no such thing as a criminal? There is a distressed adult, and a society?”

As a society we have a responsibility to all people, young or old, to support them to find better ways to manage their distress. And as some have suggested, prison is like a time out for adults.

The thing about time out, for children or adults, is it deprives the person of the very thing they need to calm down, regulate themselves, or change their behaviour: meaningful connection.

Because there is also no such thing as an individual.

The Nutters Club: What makes our blood boil?