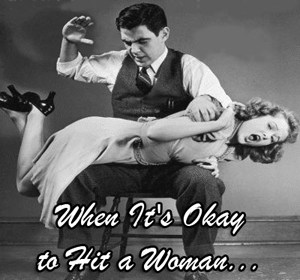 “It’s our experience, in dealing with people affected by the current domestic assault law, that many good husbands, and some wives, are being hauled before the courts because of a minor slap or shove.” said Family First spokesperson Bob McCoskrie. “We think that sometimes the best way to get your point across, especially when the other person isn’t listening, is to give them a firm, but loving slap, and frankly we don’t see this as a problem.  We don’t think the majority of New Zealander’s do either.”

Responding to strong criticism from domestic violence campaigners, women’s refuge, men’s anti-violence groups and feminist academics, who all site many years of research into the traumatic effects of intimate partner violence, McCoskrie said “Look that’s typical junk science.  These studies confuse the effects of a light slap or shove and more serious, and obvious beatings.  We have studies from respected academics that show that not only does the occasional slap or shove not harm people, but that actually in some cases it improves the quality of a marriage.”

McCoskrie went on to say “We’re not advocating for domestic violence, we think people who, for example, throw people down stairs are bad people and should be prosecuted to the fullest extent of the law.  But that’s not the same thing as giving your wife a firm slap if she is hysterical and just refusing to listen to your point of view.  Right now their are lots of good husbands who are being treated like criminals for getting frustrated with their wives, and we think that’s Not OK”

Family First intends to lobby the Government to change the law to decriminalize minor physical disagreements between husband and wives.  When asked McCoskrie said it is his view that people should still be prosecuted for minor violence if you’re not married, or in a same sex relationship, because they aren’t really relationships and shouldn’t be afforded the same protections.

This post is satire, but if you think what I’ve written here is far fetched, think again.  It might be shocking to read but the point of view of Family First and Bob McCoskrie is not made up, just shifted in context.  These statements are the exact same arguments he made in an interview with Radio Live yesterday about Family First’s proposal to decriminalize light smacking of children.  If it sounds worse in this context, you really should ask yourself why…