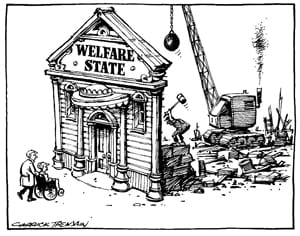 Can political policies make a difference to our levels of happiness?  And if they do then what policies and government approaches make us happier?  Mark Sainsbury and I talked about this on his Sunday Morning Radio Live show this week.  (Click here to listen to the interview)

As regular readers of this blog will know, I write a lot about happiness and politics.  So when I came across this research that links human happiness levels with politics. I was intrigued.  And even I was surprised about the influence of Workers Union membership levels.

But first how do you measure happiness levels to know whether they are affected?  The World Values Survey is the go to research for a lot of population level stats…

“The World Values Survey provides comparable data on life satisfaction and other measures of subjective wellbeing for the universe of industrial democracies from 1981 to 2014. Most of the research in happiness economics relies upon this survey question (or some minor variant): ‘All things considered, how satisfied are you with your life as a whole these days?’ to which respondents are asked to reply on a scale from 1 (dissatisfied) to 10 (satisfied).”  (Click here for the whole article).

Happiness under that definition isn’t some sparkly eyed, just bought new sneakers happy.  It’s basically how satisfied you are with your life.  However “Happiness” is catchier, so this is where the field of “Happiness Economics” comes in.  And to me it’s pretty simple really:

“life satisfaction is higher in those countries that have a higher percentage of gross domestic product devoted to social spending… …[and] generous unemployment compensation” (Click here for the whole article).

So if there’s a larger “Welfare State”, in areas like health, education, public services, police etc. then people are happier on average in that society.

But surely just the lower socioeconomic brackets would benefit though right?  Well, not quite…

“Critically, all of these relationships maintain regardless of one’s income or social status. Everyone benefits from a more generous welfare state, from labour laws that protect workers, and from strong unions, whatever their income, in that these institutions help build a more ‘liveable’ society of shared prosperity (and shared human dignity) from which all benefit.” (Click here for the whole article).

That’s clear then.  The global research shows countries with: stronger public services and where government spending is a bigger portion of GDP: it is those countries that report consistently higher levels of happiness.

Remember what I said about Uinions?  Turns out population membership levels in trade Unions, even allowing for all other variables, shows a direct relationship with life satisfaction.

And before you trot out the “yes but that’s just the Scandanavian Countries, and it must be cultural” argument…

It even holds true in the USA.

States with more of the above policies at a State level, do better on happiness and life satisfaction scales on average than other states that hold to more of a neo-liberal suite of policies.

One of the problems is it’s easy to therefore construe the polices of small Government (less for all, and more for market success) as cruel, inhumane even.  That’s only half right: they are inhumane (but in a robotic as opposed to flesh-eating zombie kid of way).

The problem isn’t malice, happiness is just absent from the conversation.    Too often it’s easy to get caught in the hateful words of negative perspective politics, and that isn’t to minimize suffering, but to say how do we change the compass and include human life satisfaction as a primary political metric, and now safe in the knowledge this will make everyone happier, and ultimately reduce suffering.

Polling our happiness would be much more useful that polling people on particular issues, especially if we already know what levers to pull if population happiness levels start to drop.  (I can quite safely say no other political poll I have ever read or participated in has increased my level of life satisfaction.)

Sounds Utopian, and it isn’t meant to.  I’m sure many people disagree and many people much smarter than me can point out the flaws in the cited research.

But ultimately we shouldn’t need research to tell us if that if society as a whole is fairer and healthier, and that as a result fewer people around us are going without, then everyone is more satisfied with their life.

Sadly, we do.  More than ever.