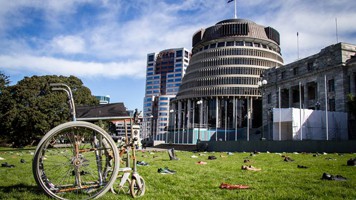 What are political parties doing for mental health?

It was a year ago when the People’s Mental Health Review started to collect stories from people who had direct experience of the growing mental health crisis in New Zealand.

We wanted to give voice to those who weren’t being heard, as the calls for action grew.

Twelve months later we are now having a national conversation about mental health on an unprecedented scale. And mental health is squarely – smack bang – in the middle of the election agenda.

This is a good thing, despite the fact that some worry about mental health and suicide becoming politicised or a “political football”. Without the levers and funds of government, change is simply not possible.

All I wanted when we started our review was for the government to start listening. But to listen, you have to show up.

Sunday September 10 was World Suicide Prevention Day. On the steps of parliament the “Yes We Care” Coalition laid out 606 shoes to represent those lost to suicide in the last year, as well as supporting families who lost loved ones to tell their stories, and in doing so call for change.

All the political parties were invited to be there but National and ACT didn’t even respond to the invite to attend the event.

And they didn’t show up on Sunday. (National’s Chris Finlayson and Act candidate Grae O’Sullivan did attend a political panel on suicide prevention in Wellington the next day.)

All political parties were also asked by “Yes We Care” to make a number of commitments to bereaved families, including an urgent inquiry into mental health, and setting a clear target for suicide prevention.

All the parties except two replied and committed to change. Guess which two?

Labour and the Green Party were both at the rally on Sunday, and when you read their respective polices, you can see they’ve been listening. The People’s Mental Health Report asked for four things:

So here we are, 12 months on with all the political parties – except again National and Act – agreeing to an Independent Review. The Labour and Green parties have developed detailed mental health policies that call for a reinstatement of independent oversight – in the form of the disbanded Mental Health Commission – and in slightly different ways proposing ways to urgently improve access and increase funding.

Between them, all four recommendations are met.

For those of you who are still cynical, worried that after the election all this will be forgotten, let me reassure you.

Those of us pushing for change won’t stop after September 23rd. Because the pain of losing someone to suicide won’t stop, nor will the demand from those in psychological distress, to just have someone to listen to, abate.

Besides, we now know what politicising suicide looks like. It’s Simon O’Conner (Chair of the Health Select Committee by the way) ignoring the pain and grief of families and accusing Jacinda Ardern of “encouraging suicide” because she supports euthanasia.

But that’s what happens when you don’t show up, and don’t listen. One year on, some things still haven’t changed.

Nutters Club: 606 pairs of shoes, suicide and a national election