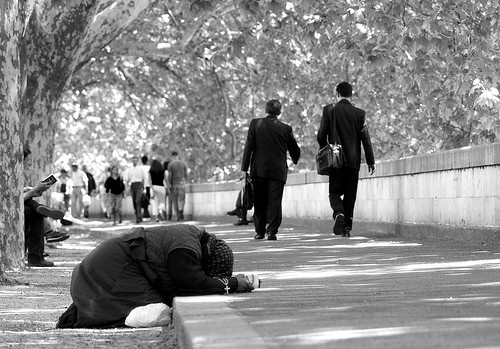 It’s relatively easy to say “of course I would help a stranger in need.”  More recently I’m sure people read this story in the press and were disgusted and outraged.  How was it that a number of people stood by as Praveet Chahal was savagely beaten, in broad daylight?  We read it and think, “I’m sure I would’ve done something to help”

But would you?  Wallace and I talked about this horrific assault this week, and how to understand the behaviour of the public who witnessed it, on his Sunday show on Radio Live.  (Click here for audio of the interview)

The “bystander effect” as social psychologists call it has been extensively studied, as it predicts such a shocking and morally hard to digest behavior pattern in modern society: namely the more people there are present or witnessing someone in need of aid, the less likely it is that any one individual will assist.

So from the research, two main factors tend to make this kind of real life intervention difficult for most people.  Firstly the apparent paradox of the more people, the less likely someone will intervene, is explained by the theory of “diffusion of responsibility“, namely people tend to think “someone else will do it.”  This is further accentuated by the fear of shame, or standing out in public.

The second big factor, and I can’t help but think it had a role to play in Praveet Chahal’s horrifying experience, is we are less likely to help those we see as different from us, and more likely to help those of a similar ethnicity and socio-economic status.  The research initially (in the USA) isolated race as a factor, but it actually seems any perceived difference can reduce the likelihood of intervening.  There are some exceptions, but they tend to “prove the rule”.

Our prejudices fuel the bystander effect. And so does, I believe, the general malaise and disconnection that creates distance and a lack of empathy from our fellow humans.

The good news? The research also points towards some clear factors that tend to increase the chance people will intervene.

A lot of people have theorized that the bystander effect is a modern malady, a symptom of the impersonal and disconnected nature of city living.  And there is some truth in that.  Studies have shown that the main factors that diminish the strength of the effect is individuals compassion, the strength of their moral beliefs and how much they can identify with the individual.  More compassionate individuals tend to feel connected to people more broadly and as a result are less predjudiced.

It’s also true that someone is more likely to intervene if they’re with friends and can intervene as a group.  It also helps to have skills, first aid, or crisis intervention skills for example.

If you’re unfortunate enough to be attacked, or otherwise require assistance while in public, it helps to make eye contact and direct your requests for help at one person in particular, and to be specific about what you need.

Ultimately if we increase our self awareness, work to overcome our prejudice and have empathy and compassion for others regardless of their differences to us, we become more likely to help others.  That might take courage, but as I’ve said before, “there’s little doubt the world needs more heroes.”

Too much of a good thing