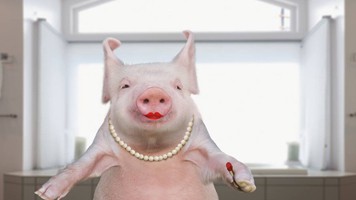 Why are people so easily offended these days?

“People seem to get offended more easily these days, why is that?”

Is it true that people are more easily offended? Is it political correctness gone mad? Has anyone asked how pigs feel about makeup?

What does it mean to be offended by something, and how do we know when we are? Loosely put, it’s a feeling. To be offended is to be that particular mix of hurt and angry where we feel that ourselves, someone, or something we care about has been attacked or put down.

I’ve talked a lot about validation in this column, and how hard it can be to simply allow others their emotional responses. We can all be guilty of telling someone “to get over it” when they are upset for reasons we don’t understand.

Telling someone they shouldn’t be offended is, of course, a very specific type of invalidation.

In the last week, I’ve seen so many (largely men) telling people what is and isn’t offensive about the application of makeup to porcine mammals. So much that it is clear many people don’t get this central point: It isn’t up to anyone else to decide what an individual might find offensive.

But of course, it happens so frequently to women online we now even have a term for it: “mansplaining”.

Now, at the risk of mansplaining mansplaining I believe, like a lot of emotionally invalidating behaviours, most people don’t intend to offend or invalidate. Equally, however, if your response is any version of “PC gone mad” then you probably need to sit down, shut up and listen for a change.

Not meaning to offend is understandable, but it’s also no excuse. It’s certainly not a reason to stop listening and understanding. After all, if someone is hurt by your words, why wouldn’t you want to know about it? Is being right so important that you don’t care?

Culturally in New Zealand we’ve always had this slightly cruel, jocular way of being with each other, especially as men. Taking the p**s, putting others down in funny and witty ways is something we will all recognise. But it’s a fine line between taking the mickey and bullying.

But I don’t believe for one moment people are now more easily offended. I do think it’s true we are hearing more about it; it’s much easier for all of us to have a voice, whether that be via social media or just due to the fact we no longer expect women, minorities and the disaffected to shut up.

Ultimately, this is a good thing. What’s wrong with wanting to live in a world where people can speak up if they feel hurt, challenge people to be more thoughtful with their words, and not attack or belittle people because of their gender, looks, skin colour or views on the world?

But privilege is hard to spot when you’ve benefited from it. Our egos make it hard to see, and even harder to admit.

And I guess when you’re used to being on TOP, it can be hard to change.