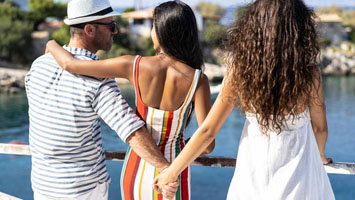 Why do some people have multiple partners?

When you think about it “non-monogamy” isn’t that unusual, it’s just the consensual bit some might find a novelty. Kyle MacDonald explains.

The American Psychological Association recently caused a bit of a stir in conservative Christian communities in the USA by announcing they were forming a new research group, the “Task Force on Consensual Non-Monogamy”.

Now, this might not be everyone’s cup of tea, as it were. And it’s certainly not hard to figure out why conservative Christians are up in arms about the APA seemingly endorsing such relationships.

But psychiatry and psychology has an important role to play in what we consider “normal”, and hasn’t always done that well. It took far too long for psychiatry to accept that same sex attraction was not a pathology, for instance.

These kinds of changes don’t “endorse” any particular behaviour, but they do acknowledge that there isn’t anything pathological about them either.

What this kind of task force does is hopefully protect people from stigma and judgment by encouraging more research and understanding as to why some people are drawn to these less common types of relationships.

Ultimately understanding, not stigmatising, has always been the stated goal of psychology.

If, like me, you’re a bit old fashioned and have trouble getting your head around being able to manage such an arrangement, that’s understandable, but what is clear is that quietly people have always practised all sorts of ethical non-monogamous relationships – and if everyone involved is okay with it, what’s the problem?

In fact, when you think about it “non-monogamy” isn’t that unusual, it’s just the consensual bit some might find a novelty.

With this in mind, what some recent fledgling research about consensual non-monogamy tells us isn’t really much of a surprise.

And maybe this is the lesson that we can all learn. Putting aside sex for a moment – and the somewhat titillating appeal of having sex with whomever you want – maybe we should all be more open to cultivating a range of relationships that meet our wide range of needs, even if, like me, you’re old fashioned enough to still only have one sexual partner.