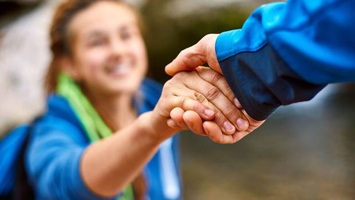 Why you shouldn’t lose your faith in humanity

If you spend too much time watching the news, reading the comments online, or on Twitter, it can be easy to feel that the human race is spiralling towards ever more cruelty, selfishness and brutality.

Yet despite this, at least in day-to-day life, most people seem fundamentally good. Society in New Zealand — despite what some might say — works.

Underpinning the capacity for billions of human beings on the planet to live with varying levels of co-operation, is the imperfect ability to be altruistic.

Altruism is something that has puzzled psychologists and students of human nature throughout human history. If you look at our species from an evolutionary perspective, generosity towards others — even to the point of being willing to sacrifice our own lives — makes no sense. Generosity towards those we aren’t related to does nothing to improve our genes’ chances: quite the opposite.

Yet, it would seem that as a result of having to live in co-operative societies for thousands of years, generosity and fairness in our interactions with each other is the default.

An experiment, dubbed “the ultimate game” illustrates this, and it consistently — across different groups and cultures — yields the same results. In the experiment people are paired up, and one of them is given a sum of money to share. After one round, you change partners so you never get to “return the favour” with the same person.

The person allocating the money gets to make one offer, no negotiation, and gets to decide how much, from zero to 100 percent, of the money to offer to the other person. If the offer is rejected, neither party gets any money, if it is accepted they both get to keep the amount.

Well, the most common offer in experiments is a 50/50 split. Offers too small are rejected, despite the fact that means sacrificing an amount of money. On the other hand, individual selfishness does tend to stop people from making overly generous offers, but an understanding of generosity tends to push towards fairness.

Capitalism, and rational economic theory tends to have us believe something different. It says people will try to maximise their own gains, and behave selfishly. This would tend to predict that people will take whatever they’re offered — because something is better than nothing — and that those offering the deal will tend to try and keep as much as possible. On average, this isn’t true.

On average, people are good.

So while we may elevate those selfish deeds, those atrocious acts, and the problems of the world as newsworthy — because they are — it’s important to remember that all is not lost. Given the opportunity, and the right conditions, most people will do the right thing.

But there is one proviso with the “ultimate game” experiment. Largely, these experiments are conducted where the participants are from the same society. It’s easy to share, and be generous with those we see as being like us.

So call me a Social Justice Warrior, but it isn’t altruism or a lack of generosity that is driving our species to the brink. It’s the growing focus on difference, nationalism and race.

It takes effort to drive us away from altruism and generosity. And it’s going to take work to get us back to that place too. Because there’s no avoiding the fact we’re all in this together.

The Nutters Club: Dealing with failure and rejection